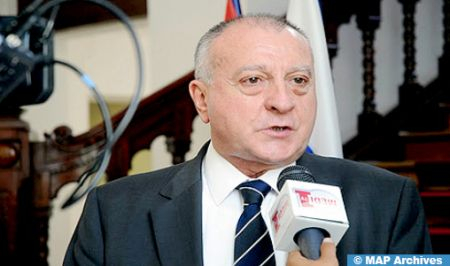 The hostile act of Tunisian President Kaïs Saïed who received the leader of the polisario separatists is “responsible for the failed meeting” of TICAD, held on August 27-28 in Tunis without Morocco, a “heavyweight of the African cooperation,” according to Charles Saint-Prot, Director General of the Observatory of Geopolitical Studies, a Paris-based research center in geopolitics and international relations. This confirms the “hostility” of the Tunisian leader to Morocco, because the country has never left its neutrality since Bourguiba, the French geopolitical expert said on Monday. Saint-Prot wondered about the reasons that led the Tunisian president to act in this way “to the point of sabotaging an important summit.” “Unfortunately, the conference was marked by the absence of Japanese Prime Minister, Fumio Kishida. If one of the main figures is absent from such an event, this makes it a less prestigious summit. Morocco was also absent, which considerably reduces the scope of the conference because of the visionary policy of King Mohammed VI for Africa and of the fact that the Kingdom is a heavyweight in cooperation between Africans,” the expert underlined in a statement published on the website of the Observatory. “This meeting will therefore fall short of expectations,” the expert noted, recalling that Senegalese President Macky Sall, who chairs the African Union, “regretted” on Saturday, the absence of Morocco, a “prominent member of the African Union, for lack of consensus on a question of representation.” The absence of Morocco is justified by the fact that the Tunisian president received the leader of the polisario separatists and imposed his presence at the summit, against the advice of Japan and in violation of the preparation process and the established rules, Saint-Prot observed. Several African countries have expressed their disapproval of the “blunder” of the Tunisian president, while the President of Guinea Bissau and current chairman of the Economic Community of West African States (ECOWAS), Umaro Sissoco Embalo, has even left TICAD in protest against the presence of pro-Algerian separatists. Referring to the “very clear” statement of the Moroccan Ministry of Foreign Affairs in reaction to the reception of the leader of the separatist militias by the Tunisian President in Tunis within the framework of this summit, Saint-Prot noted that the document specifies that it was agreed from the outset and with the agreement of Tunisia, that only those countries that have received an invitation co-signed by the Japanese Prime Minister and the Tunisian President, will be able to take part in this meeting. An official note verbale issued by Japan, August 19, 2022, explicitly emphasizes that this co-signed invitation is “the only and genuine invitation without which no delegation will be allowed to participate in the TICAD-8,” stating that “this invitation is not intended for the entity mentioned in the note verbale of August 10, 2022,” i.e. the separatist entity, he recalled. In relation to the reception reserved by the Tunisian head of state to the leader of the separatist militia, the statement said that the stubborn reference of the Tunisian statement to “the reception of guests of Tunisia on an equal footing” raises “the greatest surprise,” knowing that neither the Tunisian government nor the Tunisian people recognize this puppet entity. According to the expert, Morocco’s decision does not put into question its attachment to the interests of Africa and its action within the African Union, nor does it question the commitment of the Kingdom within TICAD.