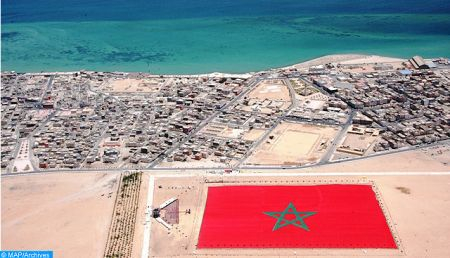 The autonomy plan proposed by Morocco remains the only solution to end this artificial dispute, according to several Chioukhs and notables of Sahrawi tribes participating in the 1st International Conference for Peace and Security in the Sahara, held in Las Palmas. Speaking at the opening session of this international meeting on Thursday, the dignitaries noted that the “polisario”, which still clings to outdated positions, does not represent the Sahrawi population, which is determined to find a way out of this conflict based on autonomy under Moroccan sovereignty. Emphasizing the centuries-old historical links between the Sahrawi tribes and Morocco, Cheikh Abdi Bouira noted that the “polisario” has no legitimacy to represent the Sahrawi populations. The notables and Chioukhs of the Moroccan Sahara tribes “will not allow anyone to take advantage of this artificial conflict for his interests,” he said. In the same vein, Cheikh Lafdal Ould Lamrabbih Rabbou denounced the maneuvers of the “polisario”, which shatters “dreams of peace, progress and reunion in Morocco’s southern provinces.” Polisario and its master, Algeria, are called upon to stop interfering in the affairs of the Sahrawi populations, who want to decide their fate freely and contribute to the development of the Moroccan Sahara,” he said, adding that “Polisario” sows hatred and misery and promotes a discourse of violence and division.” For his part, Cheikh Salhi Abdallahi condemned the archaic discourse of the “polisario”, which sells illusions to the populations suffering in the camps of Tindouf. Instead of moving towards a final solution, the “polisario” works to keep this artificial dispute alive and to enrich itself at the expense of the suffering of the populations settled in the camps of Tindouf, he noted.