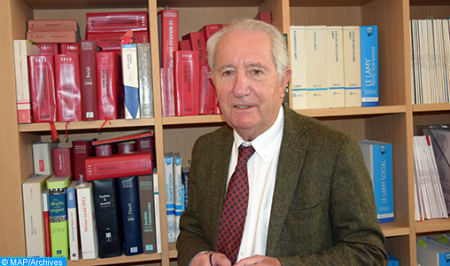 The Tindouf camps have become “a breeding ground for delinquency” totally abandoned by Algeria “in scandalous conditions”, said president of the France-Morocco, Peace and Sustainable Development Foundation, Hubert Seillan. “The Tindouf camps are a breeding ground for crime because of their total abandonment by Algeria in conditions that are, from the point of view of human rights, quite scandalous,” said Seillan, who was speaking during the program “Questions d’Actu” broadcast Thursday evening on the information channel Medi1 TV. Seillan, who castigated the full responsibility of Algeria in the continued suffering of the population in the camps of Tindouf, also referred to the efforts made by Morocco for the development of the southern provinces and the final settlement of the artificial conflict over the Moroccan Sahara. The president of the France-Morocco Peace and Sustainable Development Foundation had presented and signed, recently at the Palais des Congrès in Laayoune, his book “Le Sahara Marocain: L’espace et le temps” (Moroccan Sahara: Space and time), published by “La croisée des chemins”. The France Morocco, Peace and Sustainable Development Foundation, had also called, this week, on Paris to clarify its position on the Moroccan Sahara issue, through a “clear commitment”. “The position of France today is rather ambiguous,” said the president of the Foundation during the program “Questions d’Actu”. Seillan said he urged the French authorities to clarify their position “through several appeals to the French president for recognition of the Moroccan Saharan fact”. Hubert Seillan, also a lawyer at the Paris bar, described Morocco as “a country that impresses in many ways”, noting that the Kingdom has “a constitution that combines balanced conditions, tradition and the ideals of democracy”.