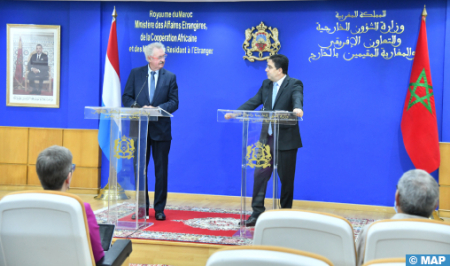 The Minister of Foreign Affairs, African Cooperation and Moroccans Abroad, Nasser Bourita, on Tuesday stressed “the quantitative and qualitative dynamics” in Europe around the autonomy plan, presented in 2007 by Morocco to resolve the artificial dispute over the Moroccan Sahara. “At least a dozen European countries have clearly expressed their positive appreciation of the autonomy initiative,” said Bourita at a press conference, held after his talks with his Luxembourg counterpart, Jean Asselborn, currently on a working visit to the Kingdom. Bourita has, in this context, cited as examples Portugal, Spain, France, Luxembourg, the Netherlands, Germany, Cyprus, Romania, Hungary and Serbia. This dynamic around the autonomy plan is also noted in other regions of the world. The Minister recalled in this regard the “strong, visible and constant support” of many Arab and African countries, and that of the United States, whose position is “a turning point in this issue.” In addition, Bourita said that this momentum, which is the result of the vision and involvement of His Majesty King Mohammed VI, is important at three levels. It is important, first, because Europe is a legalist voice that other parts of the world listen to and that does not constitute an emotional reaction. It follows a thoughtful evolution, noted at the level of several countries, he said. Secondly, because “Europe is close to the regional dispute. It knows its genesis, its cost and the importance of a pragmatic and realistic solution,” said Bourita. This dynamic is also important because it helps the efforts of the United Nations, and those of the Personal Envoy of the Secretary-General, Staffan De Mistura, to achieve that the Security Council can call for a realistic and achievable solution, based on compromise. “This momentum around the Moroccan autonomy initiative can, thus, constitute the prelude to action at the international level to finally find a final solution to this regional dispute, in full respect of the territorial sovereignty and national unity of the Kingdom of Morocco,” said Bourita. Talks between Bourita and his Luxembourg counterpart ended with the release of a joint communiqué in which Luxembourg considers the autonomy plan presented in 2007 as “a serious and credible effort” of Morocco and as “a good basis” for a solution accepted by the parties.