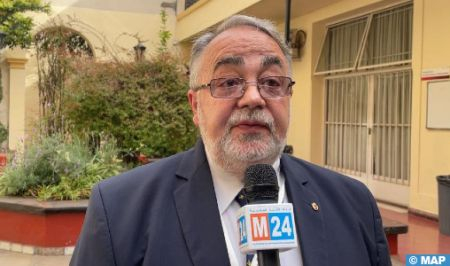 The polisario, which has set up its bases in southern Algeria, systematically uses minors under 18 years of age as “child soldiers, whom it trains, dresses in military uniforms and equips with lethal weapons” to incorporate them into its armed militia or to use them in propaganda actions such as the so-called “Holidays in Peace” program. This was the main finding of participants in the “International Congress of Social Psychology”, held from 5 to 8 October in Buenos Aires. At a conference scheduled as part of the congress under the theme “The problem of child soldiers: a challenge for the humanitarian law of war,” the expert in international relations Adalberto Agozino, stressed that for years, various international humanitarian organizations and independent journalists denounce, with photos and videos, the presence of child soldiers in the ranks of the polisario, “in the face of total indifference of UN and European authorities”. The recruitment of children by the polisario begins at the age of ten, with a “military training”. For some, they are then separated from their families and sent to Cuba or other Algerian cities for years to receive military training and political indoctrination, he added. Some of these children stay away from their families and communities for decades, especially in Cuba, and then one day, the polisario leaders decide that they must return to the camps in Tindouf. The shock is so strong that these young people discover that they do not belong to any country, having forgotten their mother tongue and their religion, added Agozino. He denounced in this context “the international impunity enjoyed by the leaders of the polisario and the Algerian government” to the extent that they allowed the presence of a child soldier among the delegation that accompanied, in January 2022, the special envoy of the Secretary General of the United Nations, Steffan de Mistura during his first visit to the Tindouf camps. For the expert “the use of child soldiers to try to resolve conflicts is the most extreme degree of exploitation of children”, because these “victims not only lose their childhood (and sometimes their lives), but throughout their lives they bear physical and psychological scars”. In a statement to the Moroccan channel M24, Agozino welcomed the holding of this “International Congress of Social Psychology” at the Argentine University “John F. Kennedy” which opened the way to a debate with international experts on the problem of child soldiers, and in particular, the case of child soldiers of the polisario. Referring to the propaganda program “Holidays in Peace” organized in Spain and its psychosocial consequences on children, the Argentine expert pinpointed the systematic policy of the polisario to separate some children from their families and send them to Cuba for military training and political indoctrination. For him, this is “one of the most aberrant humanitarian crimes, because it affects defenseless children and helpless families, because if they refuse to participate in the propaganda activities of the polisario, they suffer reprisals of all kinds, including access to adequate food and other basic necessities, medicines, etc…”.