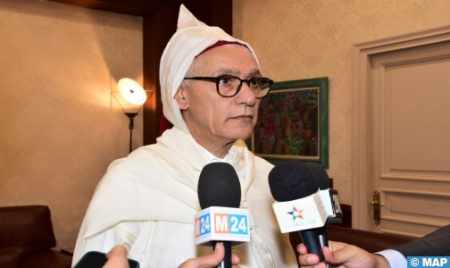 Speaker of the House of Representatives, Rachid Talbi Alami, described as “historic” the speech delivered Friday by HM King Mohammed VI at the opening of the session of Parliament, in the sense that it sets out major guidelines on issues relating to the future of all Moroccans, namely the management of water stress and investments. “His Majesty the King delivered at the opening of the current legislative session a historic and very important speech, in which the Sovereign addressed two key issues relating to the problem of water and the consequences of drought that the world is experiencing, not only Morocco,” said Talbi Alami in a statement to the press. The Royal speech “outlines a roadmap for water management, consumption and distribution, which allows the government and parliament to work hand in hand to develop, as soon as possible, solutions to face the scourge of drought, which affects all aspects of life,” he said. The second issue is related, he said, to both public and private investment, “which coincides with the adoption of the draft framework law that constitutes a new charter for investment, by the Committee on Finance and Economic Development, which has considered this law after being submitted to a Council of Ministers. The speaker of the House of Representatives announced that this text will be submitted for approval next week. Talbi Alami recalled that the Sovereign has highlighted the important role of the Moroccan community residing abroad in this area, as well as the imperative to involve it in the investment charter. The link established between the problem of water and the promotion of investment has “great importance in the current situation”, because the two themes have an impact on the long term, involve a multitude of sectors and therefore require the mobilization of efforts of all, he added. “This is the future of all Moroccans, and we will work together with all stakeholders – majority, opposition and government – to live up to the aspirations of His Majesty the King, may God assist him,” said the speaker of the House of Representatives.