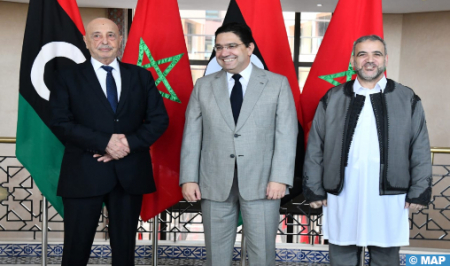 Libyan House of Representatives Speaker Aguila Saleh and High Council of State Chairperman Khaled Al-Mishri agreed, on Friday in Rabat, to implement the outputs of the inter-Libyan dialogue of Bouznika, on the posts of sovereignty and unification of executive power. Speaking at a joint press briefing held after a meeting with Al-Mishri, Aguila said it was agreed to “implement the outputs of the inter-Libyan dialogue of Bouznika on the posts of sovereignty in the coming weeks and before the end of December. The two parties also agreed “to ensure that there is a single executive power in Libya as soon as possible,” highlighting the importance of “doing what is necessary to initiate presidential and parliamentary elections.” These elections respect “a clear roadmap and legislation, on the basis of which the elections will be held,” he added during this press briefing held in the presence of the Minister of Foreign Affairs, African Cooperation and Moroccan Expatriates Nasser Bourita. On this occasion, the Libyan lower house speaker highly praised HM King Mohammed VI’s role in “watching over the stability of Libya and the preservation of its territory and its unity,” expressing his deep thanks to the Sovereign, the government and the Moroccan people for their warm welcome and hospitality. For his part, Al-Mishri noted that the “splitting of institutions has only exacerbated the crisis and it was imperative to unify them,” stressing that it was agreed to continue the agreement on the measures necessary to conduct the presidential and parliamentary elections as soon as possible. The unification of sovereign institutions and executive power will pave the way for the conduct of these events as soon as possible, he stressed. He recalled the meeting held in Bouznika between the House of Representatives and the High Council of State and which was sanctioned by an agreement on the unification of power or sovereign institutions, noting that this agreement was applied to two sovereignty positions out of seven. “We will continue our meetings in Morocco during the next period and will diligently follow the sound implementation of what has been agreed,” he continued, expressing, in turn, his gratitude to the Sovereign and the Moroccan government for the efforts made for the stability of Libya. He also pointed out that these efforts date back to 2014 when Morocco avoided conflicts, ensured to tighten the Libyan rank and find solutions through the reception of the Libyan parties without any interference.