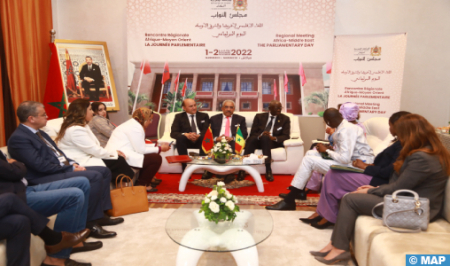 The strengthening of parliamentary cooperation between the Moroccan and Senegalese legislative institutions was, Tuesday in Marrakech, at the center of talks between the first deputy speaker of the House of Representatives, Mohamed Sabbari, and president of the National Assembly of Senegal, Amadou Mame Diop. “We discussed ways to inject a new dynamic into the cooperation between our two legislative institutions,” said Diop in a statement to the press at the end of his talks with Sabbari, on the sidelines of the Africa and Middle East Regional Meeting of the Open Government Partnership (OGP). Diop called for the reactivation of the Moroccan-Senegalese friendship groups at the level of the two parliaments, welcoming the “very strong” ties of friendship and brotherhood uniting Dakar and Rabat and the convergences of views characterizing their positions on issues of common interest. The Senegalese official also lauded the holding of the Africa and Middle East Regional Meeting of the OGP on African soil, highlighting the key role of parliaments in the development of inclusive public policies, which respond sustainably to the needs and expectations of citizens. For his part, Sabbari praised the “strong” relations between the two countries and the two peoples, stressing that the exemplary partnership between the two countries is a successful example of South-South cooperation in all areas. In this sense, he expressed the determination of both parties to further consolidate parliamentary relations between their institutions, as well as to give a new dynamic to the action of the Moroccan-Senegalese parliamentary friendship groups.