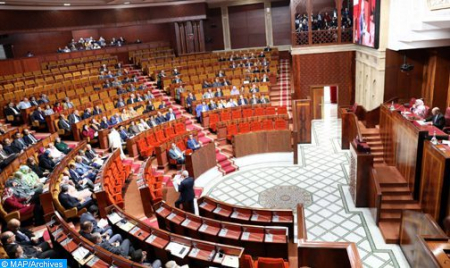 The House of Representatives adopted by a majority on Friday the appropriation bill No. 50.22, for the fiscal year 2023. During a plenary session chaired by speaker of the House of Representatives, Rachid Talbi Alami, the bill was adopted by a vote of 175 in favor, 66 against and 2 abstentions. The lower house adopted the second part of the 2023 appropriation bill and then the project in full, after the adoption the day before of its first part. In response to MPs statements, Minister Delegate to the Minister of Economy and Finance, responsible for the budget, Fouzi Lekjaa, stressed that this bill has provided concrete responses and introduced real actions to social purpose. In this regard, he recalled the allocation of more than 300 billion dirhams for public investment, in addition to an extra amount of more than 3 billion dirhams to encourage private investment in the context of the implementation of the Investment Charter. Similarly, the government has targeted through the 2023 appropriation bill, support for the purchasing power of citizens, via MAD 26 billion for the Compensation Fund, in addition to MAD 15 billion to generalize social protection and back education programs. The health and education sectors were also the focus of this bill, said the Minister, noting that the budget of the department responsible for national education will see in 2023 an increase of 6.5 billion dirhams compared to the year 2022, to reach an estimated sum of 68.95 billion dirhams. Regarding the budget of the Ministry of Health and Social Protection, Lekjaa said it will amount to 28.12 billion dirhams in 2023, up about 19.5% compared to 2022, in addition to the allocation of 9 billion dirhams to meet commitments to social dialogue and the creation of more than 48,000 budgetary positions. The Minister noted that all these measures and others as part of this bill reflect the government’s compliance with its commitments, notably the foundation of a social state based on the generalization of medical and social coverage to all citizens.