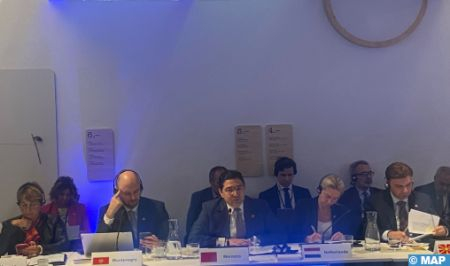 The crises affecting the Mediterranean region require structural responses based on an operational approach, the Minister of Foreign Affairs, African Cooperation and Moroccan Expatriates, Nasser Bourita, said on Thursday in Barcelona. “The crises affecting the Mediterranean are structural, not temporary. They require us to respond on the same register: through a long-term vision and an operational approach in the immediate future,” said Bourita, who spoke at the 7th Regional Forum of the Union for the Mediterranean (UfM), held on the occasion of the second edition of the Day of the Mediterranean. “Reaffirming the commitment to the programmatic goal of a ‘zone of stability and shared prosperity’, is necessary, but not sufficient,” noted the minister, calling on the UfM member countries to “mark the way” to achieve this goal and to set “common priorities and a commitment to each”. In this sense, Bourita emphasized the need to “act on policies, anticipate more, create more coherence and vectorial actions over time” and put in place “common thematic policies, targeted, programmed and funded to really act on the issues”, deploring, for example, the fact that the EU has announced the end of the marketing of vehicles with thermal engines by 2035, while no Euro-Mediterranean plan has been adopted to absorb this paradigmatic adjustment of the EU. Regarding the tools of the partnership, Bourita, who noted that the means are not commensurate with the challenges, called for more “Mediterranean protagonism”, calling to improve the performance of the UfM mechanisms, provide answers where it has remained silent, expand its agenda, accelerate the pace of its meetings and strengthen the ownership of the partnership. “We must see more of the UfM and feel more of its action,” he insisted, assuring that “it is time to invest the General Secretariat with a forward-looking mission to stop running after crises, for lack of anticipating them, to establish a renewed governance with greater coherence between the various institutions involved in the Mediterranean and to make a place for the Mediterranean in our policies, at the stage of policy shaping, which is not always the case today.” Based on this observation and an analysis of the responses given by the UfM to several challenges related to political stability and the energy crisis, food, integration, socio-economic, migration and security, as that of “proselytizing and ideological Iranian entryism,” Bourita reported three situations. First, “promising responses” exist in some sectors such as climate change and youth, and must be expanded, “responses that remain insufficient” on critical issues such as energy security and “non-existent responses” regarding health security and food security, he said. “A Mediterranean of security is possible; a Mediterranean of maritime transport is possible; and of course a Mediterranean of free movement of people is possible,” concluded the Minister. The 7th UfM Regional Forum, which brings together the foreign ministers of the 42 member states, is co-chaired by Josep Borrell, Vice President of the European Commission and High Representative of the EU for Foreign Affairs and Security Policy, and Ayman Safadi, Minister of Foreign Affairs of the Hashemite Kingdom of Jordan. José Manuel Albares, Spanish Minister of Foreign Affairs, European Union and Cooperation, and Nasser Kamel, the UfM Secretary General participate as hosts. This year, the Forum also hosts a meeting between young Euro-Mediterranean people from civil societies across the Mediterranean, who presented their recommendations and proposals to the Ministers of Foreign Affairs, in order to develop concrete solutions for an inclusive, sustainable and prosperous Mediterranean project.