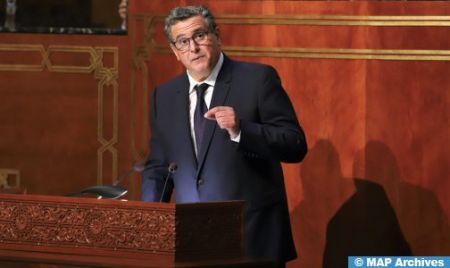 The Head of Government, Aziz Akhannouch, pleaded on Monday in Rabat for a new vision to catch up with the delay in the water sector. “Faced with the acceleration of changes and challenges, the Kingdom is called today, more than ever, to get involved in a serious and responsible way and to continue the participatory action, as part of a new vision to catch up with the backlog in the water sector and to give the national water strategy, carried out on the orders of HM King Mohammed VI for 13 years, a new impetus in terms of governance and efficiency,” said Akhannouch in response to a central question in the House of Representatives during the monthly plenary session of general policy issues, devoted to “Morocco’s water policy”. He said that this approach is likely to accelerate the implementation of the various fundamental axes of this strategy, whether sea water desalination plants, whose current number does not exceed 9 of the 20 set as a goal by 2030, or the construction of dams, whose number has not exceeded -since 2009 to date- 14 large dams out of the 57 scheduled for 2030, in addition to the operations of connection between the basins which are, in turn, significant delays. Akhannouch stressed that HM the King, who is fully aware of the climatic and demographic challenges that could affect water resources, has always, since His accession to the throne of His glorious ancestors, given special attention to the water issue, recalling that more than 50 large and medium dams have been built since the enthronement of the Sovereign, in addition to 20 other dams that are under construction. The Head of Government mentioned, in the same sense, the launch of the most important desalination plants of sea water, including that of Agadir, as well as the Royal High Guidelines for the rational management of irrigation water, a challenge that the Kingdom has managed to meet. He noted that the government has interacted effectively with the High Royal Directions contained in the speech of HM the King on the occasion of the opening of this legislative session, in relation to the management of Moroccans’ water security, which makes this “a crucial issue for the Nation.” Pursuant to the High Royal Instructions and based on the urgency of addressing this issue, he said, the government will work to manage the scarcity of water resources, ensuring the mobilization of its resources and improving the governance of their system, through the restructuring of water policy and ensuring proper coordination between different stakeholders, the aim being to strengthen the efficiency and harmony between these actors and ensure an equitable distribution of water resources between different regions, while ensuring effective implementation of the construction of dams program, desalination of sea water and treatment of wastewater and stormwater. In this regard, Akhannouch said that the government has decided, in accordance with the visionary policy of the Sovereign in this area, to devote an estimated amount of 10.6 billion dirhams under the 2023 budget (an increase of 5 billion dirhams compared to last year) to the implementation of a set of structuring projects in the water sector.