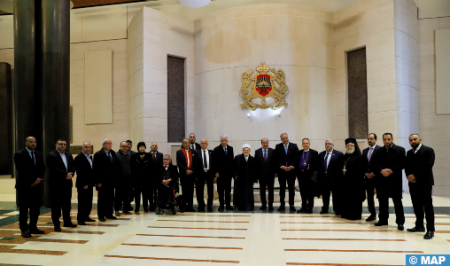 A delegation of Palestinian personalities highly praised, on Monday in Rabat, the major role and constant support of HM King Mohammed VI to the Palestinian cause, especially to the population of Al-Quds, through the projects conducted by the Bayt Mal Al-Quds Asharif Agency. According to a statement of the House of Councillors, the delegation, which includes Muslim and Christian personalities, professors, artists, businessmen and youth, highlighted, during a meeting held with the upper house’s Speaker Enaam Mayara, “the constant position of Morocco towards the Palestinian issue, calling on Arab and Islamic countries to adhere more to the Kingdom’s efforts to ensure greater funding of the Bayt Mal Al-Quds Asharif Agency, so as to enable it to cover its budget deficit in the face of the growing needs of the Maqdessis, so that they can cope with the blockade imposed by the Israeli occupation.” The delegation, visiting Morocco to participate in the celebrations of the silver jubilee of the Agency Bayt Mal Al-Quds Asharif, also expressed its condemnation of attempts to “blatant interference” of the European Parliament in the internal affairs of Morocco, in addition to its denunciation of the crime of Swedish extremists who burned the Holy Koran last Saturday in Stockholm. For his part, Mr. Mayara stressed that this meeting, which took place in the presence of the Palestinian ambassador in Rabat and the director in charge of the management of the Agency Bayt Mal Al-Quds Asharif, is an opportunity to affirm that the relationship of Morocco with Palestine is “rooted in history and based on deep spiritual and emotional foundations. Through its parliamentary institution, the Moroccan people will spare no effort to fiercely defend the Palestinian cause “through concrete positions,” he said, recalling in this regard the various initiatives taken by Moroccans within the Inter-Parliamentary Union and other continental and regional parliamentary organizations and events. Mayara also reaffirmed Morocco’s official position which goes hand in hand with the Arab peace initiative and is based on the right of the Palestinians to a sovereign and viable state on the basis of the June 1967 borders, with East Al-Quds as its capital. In this respect, he highlighted the vital role of the Bayt Mal Al-Quds Acharif Agency, placed under the High Benevolence of HM King Mohammed VI, Chairman of the Al-Quds Committee, in order to confront the desperate attempts to distort the identity of this sacred city, in addition to supporting the Maqdessis and taking into account their concerns and aspirations to freedom and to benefit from basic services including health, education, and housing. The Moroccan official also stressed that the Bayt Mal Al-Quds Acharif Agency is a successful model of effective support for the Palestinians, which should be encouraged and supported.