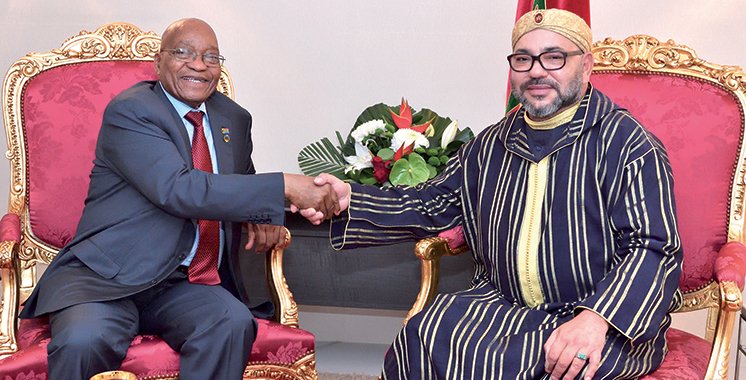 Algerian media has panicked following the historic meeting in Abidjan between King Mohammed VI and South African President Jacob Zuma on the sidelines of the recent 5th AU-EU summit.

The Algerian media, after they largely commented on what they called a Polisario’s victory since its leader, Brahim Ghali, was among the 80 heads of state and government attending the Summit, focused in stories and commentaries on the announcement of the reestablishment of diplomatic relations between Rabat and Pretoria after a break of 13 years.

These media tried to convince their readers that despite this rapprochement, South Africa continues to recognize the Saharawi Republic “SADR”.

Speaking of the Polisario’s so-called “victory” at the Abidjan Summit, the Algerian media forgot to mention that Brahim Ghali was completely isolated, as shown by photos and video footages of the Summit.

Apart from his appearance on the family photo and his presence along all other participants in a luncheon and dinner offered by the Ivorian President, Brahim Ghali and his delegation did not hold any bilateral meeting with any of the attending Heads of State and Government.

In contrast, there are media comments in Morocco about the rapprochement between Rabat and Pretoria, which is by the way disturbing Algeria, but there is no mention of an immediate withdrawal by Pretoria of its recognition of the pseudo-“SADR”, letting things take their course.

The Algerian media, so imbued by animosity against their Moroccan neighbors, also found it hard to accept the handshake between King Mohammed VI and their Prime Minister Ahmed Ouyahia. They peppered him with questions about his unexpected gesture that they deemed untimely.

On the other hand, President Zuma is to be commended for having paid tribute to the Moroccans for their support to Nelson Mandela and South Africa in their struggle for the abolition of the apartheid regime.

As far as the Algerian brothers are concerned, they have seemingly lost all memory of all the sacrifices made by Moroccans in the Algerian liberation war against the French occupier.

As a sign of recognition for these sacrifices, the Algerian regime has been closing the land border with Morocco for more than twenty years…