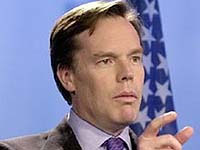 Under Secretary of State Nicholas Burns described the Moroccan autonomy initiative as "Serious and Credible" in a statement issued after a meeting Mr Burns held with Moroccan Delegation in Washington. This first US reaction is encouraging for the Kingdom of Morocco, who presented the Moroccan initiative of autonomy to UN Secretary General Ban Ki Moon yesterday morning. The delegation received by M. Burns was composed of Taieb Fassi Fihri, deputy minister of Foreign Affairs, Fouad Ali Himma, Deputy minister of Interior, and Yassine Mansouri, head of Moroccan Intelligence.According to the US statement, the Moroccan initiative could constitue a basis for the settlement of the conflict with the Algeria backed Polisario Front.