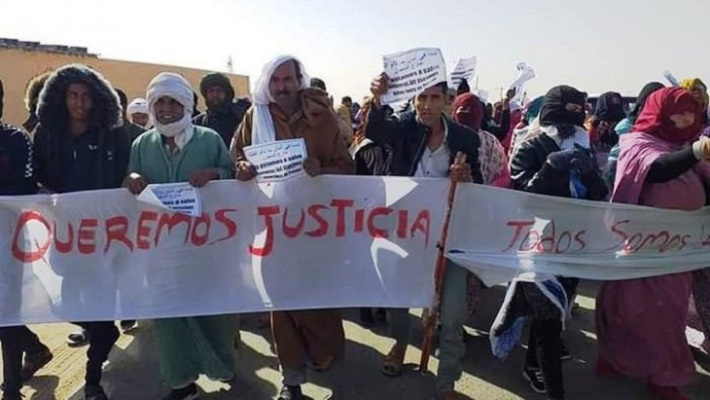 A new popular demonstration against the torturers of the Polisario front is rocking, since Monday, the Tindouf camps, South-western Algeria.

Dozens of Sahrawis, men, women and children, are taking part in this demonstration staged to protest against the condemnation, by a so-called Polisario military tribunal, of a 70-year old man to 7 years in jail for his alleged involvement in drug trafficking.

The angry protesters against repressive machine of the Polisario demand the immediate release of this former member of the Polisario armed militia who become camel farmer after his retirement.

Mohamed Sellahi belongs to the powerful tribe of the Rguibate Ouled Bourhim. He was abducted by a group of drug traffickers coming from Mali. The dealers handcuffed Sellahi and took him in their 4×4 car. After patrolling Polisario militiamen intercepted their vehicle, they put Sellahi and his kidnappers in the notorious prison of “Dhaibia”, reported on Monday Moroccan online yabiladi news website quoting a source in the Sahara.

During the night, “the doors of the prison were mysteriously opened”, allowing drug traffickers to escape thanks, of course, to the bribes paid to the jail guards. Being convinced of his innocence, Sellahi refused to run away. He remained in prison until he was sentenced to seven years in jail for a crime he didn’t commit, added the same source.

To calm down the protesters, Polisario leaders have promised Sellahi’s family a possible “pardon” from the Front chief Brahim Ghali.

In the Tindouf camps, drug trafficking is a common trade involving several Polisario’s leaders. They used this illicit trade to line up their pockets in connivance with Algerian generals.

Any dealer, who dares to operate in their area located in south-western Algeria, he is quickly captured and handed heavy jail terms.