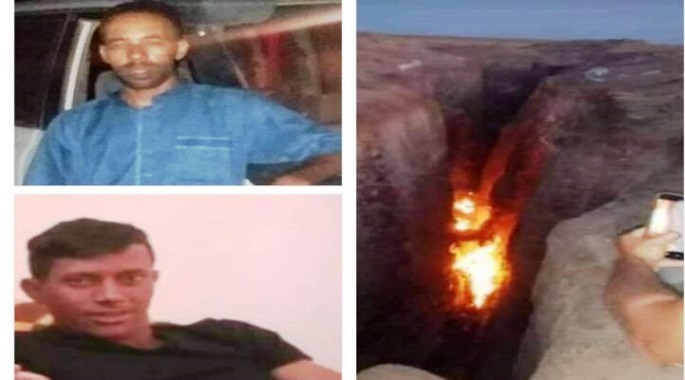 The Saharan Center for Studies and researches in Development and Human Rights firmly denounces the savage criminal act perpetrated two days ago, October 19, 2020, by a patrol of the Algerian army against two peaceful Sahrawis while they were prospecting for gold in the vicinity of the Dakhla camp south of the Algerian city Auinet Bellakraa (1700Km S/W of the Algerian capital).

The events occurred when Sahrawi gold minors, living in Tindouf camps, were surprised the afternoon of October 19th 2020 by an unexpected strong armed Algerian army patrol in the of the Dakhla camp, their colleagues were able to escape in time but the the two victims were trapped in the excavation ditch where they were looking for metals.

These two Sahrawis, Maha Ould Hamdi Oudl Suelem and Ali Idrissi (see photos attached), were burned alive in cold blood by the Algerian military patrol through introducing gasoline-soaked blankets inside the dich and set them inhumanly on fire. We address here our deepest condolences and sympathy to their families and relatives following this horrendous crime.

Through this statement  we, based on our awareness of the seriousness of the humanitarian situation in the camps and the horror of the continuous violations committed against Sahrawis in Tindouf on the Algerian soil, call for:

In view of the above, there is a range of emerging issues in respect of these executions, including the following: