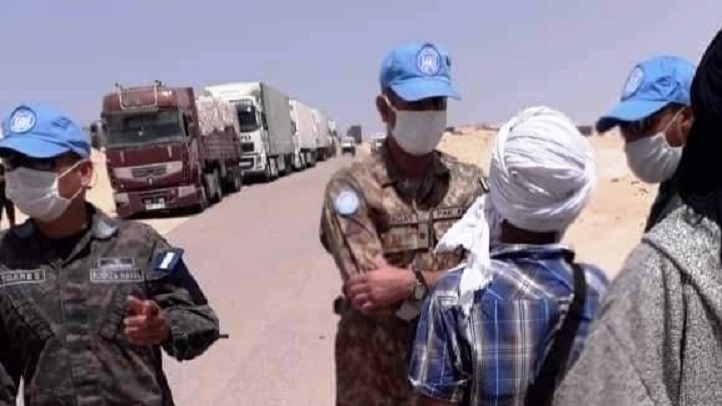 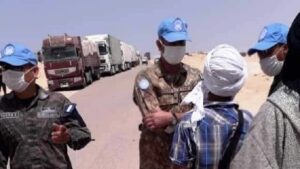 After the UN mission in the Sahara “MINURSO” has shown its incapacity to remove the Polisario militiamen from the Guerguerat buffer zone where they are obstructing and preventing trucks from crossing to Mauritania, Morocco has opted for maritime transport to continue supplying the Mauritanian markets with vegetables and fruits.

A first shipment of thirty containers carrying these products had already reached the Mauritanian markets which suffered from a shortage of agricultural products.

The arrival and delivery of this shipment were confirmed by Mauritanian Minister of Commerce, Industry and Tourism, Mrs. Naha Mint Hamdi Ould Mouknass, during a visit to Nouakchott market.

Mauritanian political leaders have complained about the inaction of their government in addressing the crisis generated by the obstruction of inbound trucks at the Guerguarat border post.

The leader of Le Mouvement pour la Refondation (MPR) and former presidential candidate (2019), Kan Hamidou Baba, described as “unacceptable” the obstruction of traffic between Morocco and Mauritania, saying the move is “an attempt to suffocate the Mauritanian economy and the economy of neighboring countries”.

Speaking at a press briefing, the MPR chief said the Mauritanian government should have had reacted and voiced its rejection of the disruption of the traffic flow in the northern border of the country.

According to local media, Deputy Chief of Staff of the Mauritanian Army, Major Gen. Mokhtar Bella Chaabane, made on Monday a surprise visit to Nouadibou. He toured the area discreetly to assess the situation in the northern border of the country.

The goal of the visit is to define the appropriate measures to “secure” the border zone with Morocco, located 55Km from Nouadhibou, and which is often infiltrated by Polisario militias, says private news agency Alakhbar.

Polisario leaders continue to ignore the warnings issued by the United Nations and the Security Council, as in resolution 2548, adopted on October 31, and deliberately procrastinate in ordering its militiamen to evacuate the Guerguarat buffer zone so that the traffic of trucks carrying goods resumes its normal flow.