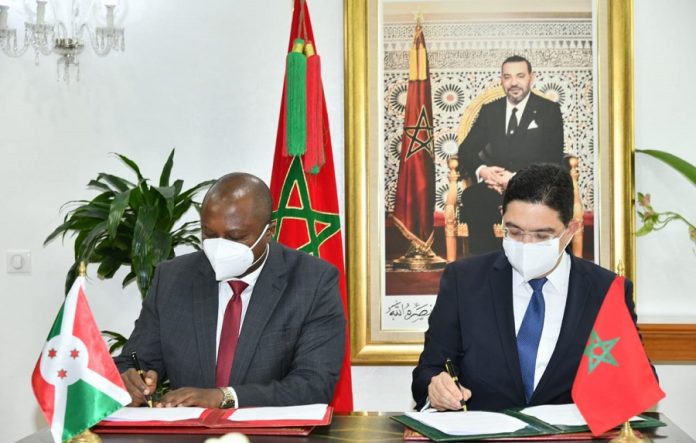 Burundian Minister of Foreign Affairs and Development Cooperation Albert Shingiro reiterated, Thursday in Rabat, his country’s support for the territorial integrity of the Kingdom of Morocco and its national unity in accordance with the UN Charter, and reaffirmed Burundi’s support for the exclusive settlement of the Sahara issue by the United Nations through the autonomy plan, as the only solution to this dispute.
The Burundian official was speaking at a press briefing, held at the end of his meeting with Minister of Foreign Affairs, African Cooperation and Moroccans Abroad Nasser Bourita, which was also an opportunity to welcome the unwavering position of the Republic of Burundi to keep its diplomatic representation in Rabat and its consulate general in Laâyoune.
In this context, a Consul General of the Republic of Burundi will be installed shortly in Laâyoune, said Shingiro.
The meeting of the two ministers was also an occasion to laud the decision of the Kingdom of Morocco to open a resident embassy in Bujumbura in order to strengthen the dynamic of cooperation in the various fields between the two countries.
Welcoming the opening of this embassy, ??the Burundian minister said that it will serve as a diplomatic bridge between the two capitals and will play the role of local diplomacy.
Thus, a technical team will go to Burundi next week to begin the procedures for opening an embassy of the Kingdom in the Burundian capital, announced, for his part, Bourita.
The minister also stressed the steadfast support of the Republic of Burundi on the Moroccan Sahara issue, stressing that Burundi always stood by the side of Morocco in a framework of sincere and active solidarity.
This position has manifested itself on several occasions and in different ways, he said.
Bourita and Shingiro signed a cooperation roadmap over the period of 2021-2024, which reflects the common will to intensify the existing relations between the two countries to give them a new impetus.