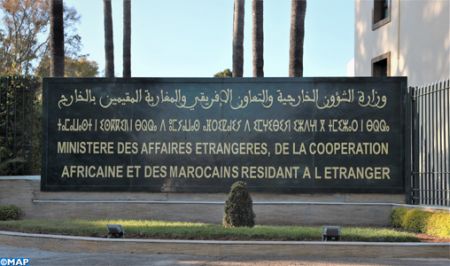 The Kingdom of Morocco deplores the attitude of Spain, which hosts on its territory the man named Brahim Ghali, leader of the “polisario” separatist militias, sued for serious war crimes and grave human rights abuses, the Ministry of Foreign Affairs, African Cooperation and Moroccans Abroad said on Sunday.

Morocco expresses its disappointment with regard to this act contrary to the spirit of partnership and good neighbourliness, and which concerns a fundamental issue for the Moroccan people and its lifeblood, the ministry added in a press release.

For the ministry, Spain’s attitude arouses great incomprehension and legitimate questions: Why was the man named Brahim Ghali admitted to Spain secretly and with a forged passport? Why did Spain find it useful not to notify Morocco? Why did it choose to admit him under a false identity? And why the Spanish justice has not yet reacted to the many complaints lodged by the victims?

“This is why the Ambassador of Spain in Rabat was summoned to the Ministry of Foreign Affairs, African Cooperation and Moroccans Abroad, so that this position could be conveyed to him and to demand from him the necessary explanations on the attitude of his government”, concluded the press release.