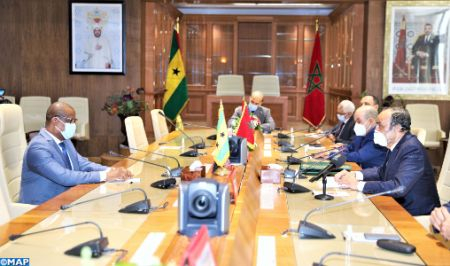 President of the National Assembly of Sao Tome and Principe, Delfim Santiago Das Neves, reiterated, Tuesday in Rabat, his country’s unwavering support for the Moroccanness of the Sahara and the firm commitment of this legislative institution in favor of the Kingdom to defend its national causes in the various international fora. “Morocco can rely on the National Assembly of Sao Tome and Principe to defend its first national cause and its interests in various international forums,” Das Neves told the press after his talks with speaker of the House of Representatives, Habib El Malki, while reaffirming the position of the State of Sao Tome and Principe recognizing the territorial integrity of the Kingdom. After expressing the determination of the National Assembly of Sao Tome and Principe to act in the interest of Morocco in the Pan-African Parliament and other continental organizations, Das Neves expressed his commitment to further strengthen the ties of friendship and cooperation between the two States, particularly in the context of parliamentary diplomacy. Referring to the experience of his country in managing the health crisis related to Covid-19, president of the National Assembly of Sao Tome and Principe said that his country’s government was able to cope with this pandemic thanks to international assistance, especially from Morocco. For his part, El Malki welcomed the constant position of the Republic of Sao Tome and Principe in favor of the issue of the territorial integrity of Morocco, especially within the African Union and the Pan-African Parliament, stressing that the Moroccan people, who are grateful for the support of this country to the national cause, will continue to show solidarity with all the people of the continent. As part of its vocation of natural solidarity with African countries, Morocco has sent significant medical aid to several States on the continent, to help them cope with the impact of the health crisis, he said. Highlighting the Moroccan experience in managing the health crisis related to the Covid-19, the speaker of House of Representatives noted that the strategy led by the Kingdom has been highly praised by international observers and organizations, including the World Health Organization. This strategy, which is based on the anticipatory vision of HM King Mohammed VI, has become a reference on the continental, regional and international levels, he added. In addition, El Malki reviewed the leading role of parliamentary diplomacy in strengthening bilateral cooperation and exploring new opportunities.