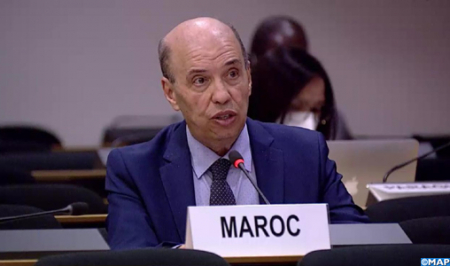 Geneva – Morocco’s Permanent Representative in Geneva, Ambassador Omar Zniber denounced, Wednesday, the dishonest and malicious actions of Algeria and the “polisario” armed militias to mislead the international community in general and the Office of the High Commissioner (OHCHR) in particular, about an alleged “special situation” of human rights in the Moroccan Sahara, while the reality is that the exercise of these rights is fully guaranteed in the Southern Provinces of the Kingdom and throughout the national territory. Speaking at a virtual meeting held by the High Commissioner for Human Rights Michelle Bachelet, with the Support Group for Morocco’s territorial integrity at the Human Rights Council (HRC), the diplomat said that “the hostile grouping to the Kingdom, led by Algeria, has neither legitimacy nor credibility to address human rights, let alone the issue of the Moroccan Sahara.” “The vast majority of its members hold sad records in this area and their massive violations are constantly denounced and condemned by the reports of the High Commissioner and by the mechanisms of the HRC,” he noted. Zniber criticized the irresponsible behavior of Algeria’s representative in Geneva who addresses the delegations of the HRC, with intimidation and violence, exposing the involvement of his country in propaganda and outrageous lies aimed at distorting the realities on the ground in the Moroccan Sahara and diverting attention from the deteriorating situation of political and civil rights in Algeria. This behavior exposes the isolation of Algeria in the face of the positive dynamic generated by the recognition of Moroccan sovereignty over its Southern Provinces, the diplomat said. The Algerian leaders have been severely questioned by the High Commissioner for Human Rights in her latest report on the legitimacy of political power in Algeria, and their responsibility in the massive violations of human rights, perpetrated against peaceful demonstrators, opinion leaders and media. The Moroccan diplomat warned against attempts to politicize and instrumentalize the Office of the High Commissioner through false allegations made by NGOs that have no credibility and are on the Algerian government’s payroll. He also reminded the High Commissioner of the persistence of serious and flagrant violations of human rights in the camps of Tindouf with the blessing and the guilty protection of Algeria, which assumes full legal and moral responsibility before the international community. To this day, the Tindouf Camps populations are deprived, by the host country, Algeria, of the right of registration, which is a prerequisite for receiving the minimum international protection, recognized by international humanitarian law and international human rights law and required by the resolutions of the Security Council, he deplored. Zniber also highlighted Morocco’s dialogue and cooperation with the Office of the High Commissioner for Human Rights on various issues of interest to the international community and reiterated the Kingdom’s willingness to maintain dialogue on all these issues. Several ambassadors, permanent representatives also took the floor to affirm their support for Morocco and reiterate their warnings against the politicization of the Sahara issue within the HRC.