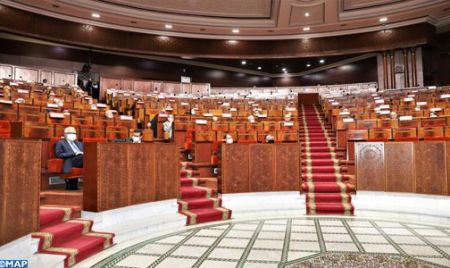 The hosting by Spain of the leader of the “Polisario” front, the man named Brahim Ghali is “an inadmissible act”, which undermines the values ??of good neighborliness, said, on Monday, representatives of the majority and the opposition in the House of Representatives. In their speeches during the monthly plenary session of general policy questions for the head of government on “the implementation of the social protection generalization”, the representatives of the parliamentary groups and groupings called on the Spanish government to rectify this error to preserve the distinguished relations between the two countries, by bringing the leader of the separatists of the “polisario” to justice. In this sense, Idriss Azami Al-Idrissi, of the Justice and Development party expressed his rejection and denunciation of Spain’s attitude which is hostile to the territorial integrity of the Kingdom and contrary to the values ??of good neighborliness and common interests of the two countries, by welcoming on its soil with a false identity the leader of the militias of the “polisario”, accused of crimes against humanity and violations of human rights. For his part, Rachid El Abdi, president of the parliamentary group of the Authenticity and Modernity Party in the House of Representatives indicated that the group follows with deep regret and astonishment the hosting by Spain of the leader of the “polisario” for ” humanitarian considerations”, describing this behavior as a flagrant violation of good neighborliness and of the strategic and historical relations between the two countries. Bouselham Dich, from the the constitutional rally group, strongly condemned this internationally rejected act, which encourages the impunity of a war criminal, believing that this act is likely to have a profound impact on the distinguished relations between Morocco and its Spanish neighbor, which constitute a model of good neighborliness, cooperation and shared destiny. Same story with the head of the Istiqlalian parliamentary group, Noureddine Mediane, who said that “if we, parliamentarians, care about the quality, the solidity, and the durability of the bilateral relations which unite the two neighboring countries, we consider this hosting as an unacceptable and reprehensible act as well as a pure and simple provocation towards the Kingdom of Morocco”, while calling on the wise men of Spain to take the necessary measures capable of preserving relations between the two countries. As for Mohamed Moubdii, head of the parliamentary group of the Popular Movement, he denounced the reception of the man named Brahim Ghali under a false identity and with the complicity of Algeria, invoking humanitarian considerations, while the leader of the separatists is accused of serious human rights violations, crimes against humanity and flagrant violations of the rights of population held in the Tindouf camps. For Chokrane Amam, president of the group of the Socialist Union of Popular Forces, the hosting by Spain of the leader of the “polisario” by falsifying his identity is a real attack on the solid relations between Spain and Morocco, stressing that these relations are based on the defense of common interests, good neighborliness, trust and mutual respect. Jamal Benchekroun Karimi, of the parliamentary grouping of progress and socialism, for his part, described the hosting of the man named Brahim Ghali as an unacceptable and deplorable act, adding that it is an outright provocation regarding Morocco and an attack on bilateral relations, as well as the good neighborliness policy between the two countries. The head of government, Saad Dine El Otmani also expressed his regret following the hosting by the Spanish neighbor of the leader of the separatists under a false identity, describing this attitude as contrary to the spirit of partnership and good neighborliness. He added that Morocco takes note of this behavior to defend its rights, sovereignty and interests.