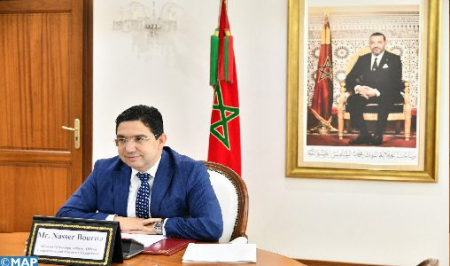 Minister of Foreign Affairs, African Cooperation and Moroccans Abroad Nasser Bourita met, on Monday via teleconference, with Minister of Foreign Affairs and Cooperation of the Republic of Equatorial Guinea Simeón Oyono Esono Angue, within the framework of the excellent bilateral relations of friendship and cooperation. The two ministers welcomed, on this occasion, the excellent and deep bonds of friendship and solidarity between the two countries, under the leadership of HM King Mohammed VI and His Brother H.E. President Teodoro Obiang Nguema Mbasogo, said a statement from the Ministry of Foreign Affairs, African Cooperation and Moroccans Abroad. They also underlined the shared views of the two countries on the various regional and international issues of common interest, as well as the shared will of the two Heads of State to make partnership relations between the two brotherly countries a model of inter-African cooperation, based on the values ??of solidarity, exchange and sharing, said the same source. Referring to the Sahara issue, Bourita praised the unwavering support by Equatorial Guinea to the Moroccanness of the Sahara and its laudable commitment to supporting efforts aimed at finding a lasting solution to this dispute, within the framework of the Kingdom’s sovereignty and under the exclusive aegis of the United Nations, as endorsed by decision 693 adopted by the African Union Summit in Nouakchott in 2018. Bourita also welcomed the commitment of Equatorial Guinea to back Morocco’s action within the AU and its support, in a concerted and mutual manner, of Moroccan and Equatorial Guinean candidacies at the level of regional and international bodies. In this regard, he expressed his hearty thanks to his Equatorial Guinean counterpart for the unconditional support given by Equatorial Guinea to the various Moroccan candidacies, in particular for the position of non-permanent member of the United Nations Security Council (2028-2029), at the Human Rights Council (2023-2025) for the position of member of the Executive Council of the World Tourism Organization (2022-2025) and for the position of President of the International Civil Service Commission (2023-2026). Hailing the depth of the ties of solidarity between the two brotherly countries, Simeón Oyono Esono Angue also voiced his country’s support for Morocco’s candidacy for the position of Commissioner at the AU Commission in the fields of education, science, technology and innovation. In addition, the two ministers underlined the interest of the Heads of State in the development of economic partnership relations between the two brotherly countries, within the framework of a new partnership strategy. In this context, Bourita voiced the Kingdom’s readiness to support Equatorial Guinea in the implementation of its 2025 industrialization strategy and the projects and programs under the “Horizon 2035” development plan. The two parties also agreed on the upcoming holding of an Economic Forum and the strengthening of Moroccan investments in sectors targeted by Equatorial Guinea, the same source said. In this regard, they underlined the need for the establishment of a Morocco-Equatorial Guinea Business Council in order to foster trade between the two countries and benefit from the promising economic prospects linked to the Equatorial Guinean consular presence in Dakhla, a future hub for regional economic integration.