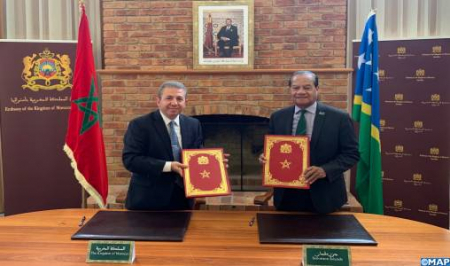 Ambassador of HM the King to Australia Karim Medrek and High Commissioner of the Solomon Islands to Australia Robert Sisilo recently signed several cooperation agreements between the Kingdom of Morocco and the Solomon Islands, aimed at strengthening the legal framework governing their bilateral relations. The signing of these cooperation agreements, which coincides with the 10th anniversary of the establishment of diplomatic relations between the two countries, will open a new page within the framework of relations between Rabat and Honiara. Medrek said that since the establishment of diplomatic relations in February 2011, Morocco and the Solomon Islands have had friendly relations based on mutual respect for territorial integrity, the strengthening of cooperation and the will to contribute to the preservation of international peace and security. The Moroccan diplomat stressed that the efforts undertaken by Morocco to consolidate its relations with the island states of the Pacific region fall under South-South cooperation, a fundamental component of Morocco’s foreign policy. Medrek recalled that the 3rd “Morocco-Pacific Islands” Forum, held in February 2020 in Laâyoune, constituted an appropriate platform to discuss the common challenges of sustainable development and to examine concrete projects in the Pacific, according to an innovative format and cooperation parameters that are adapted to the specificities and needs of the States of the region, in a spirit of solidarity and sharing of experiences. The High Commissioner of the Solomon Islands, for his part, welcomed the excellent relations of friendship and solidarity between the two countries, welcoming the new dynamic in bilateral relations. Sisilo stressed, in this regard, that the signing of the agreements will lay the foundations for a sustainable cooperation, with a view to giving new impetus to relations between the two countries.