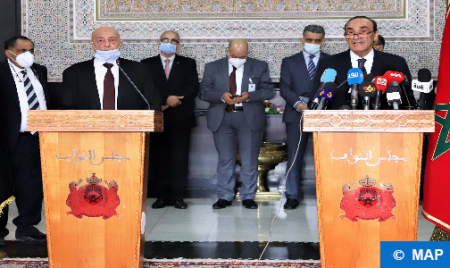 Speaker of the Libyan House of Representatives, Aguila Saleh, praised the role played by Morocco, under the leadership of HM King Mohammed VI, in the efforts to find a solution to the Libyan crisis, which led to the formation of a national unity government. During a joint press conference with Speaker of the House of Representatives, Habib El-Malki, after their talks on Friday in Rabat, Aguila expressed his gratitude and esteem to HM the King, the House of Representatives, the government and the Moroccan people for their constant and sincere support to the Libyan people in the ordeal they have been through and which is coming to an end. “Thanks to Morocco’s efforts, under the leadership of HM the King, we have finally achieved the formation of an executive power, composed of a presidential council, a president, two vice-presidents and a government of national unity, which won the confidence of the House of Representatives and took the constitutional oath before beginning its mission,” he stressed. Aguila said that his visit to the Kingdom, at the invitation of the Speaker of the House of Representatives of Morocco, is part of the strong, solidarity-based and continuous relations between the two brotherly peoples and the permanent communication between the two Houses, in a concern for cooperation and constant consultation to achieve a solution to the Libyan crisis. “We are studying the constitutional basis, and it exists now in accordance with the constitutional declaration in force, which is a constitution until it is abolished and amended,” he said, adding that the House will have to enact a law on the mode of election of the President in Libya, as it was agreed in Bouznika to appoint and constitute the positions of Sovereignty according to regions in Libya. “We have honored our commitments and have begun the implementation of the mechanism regarding the selection of leaders for these positions. The House of Representatives has prepared the necessary files and sent them to the State Council. We are now waiting for its response in order to appoint the governor of the Central Bank of Libya and the chairman of the administrative control authority, among others,” Aguila said. The Speaker of the Libyan House of Representatives reaffirmed that the elections will be held on December 24, 2021 as scheduled, stressing that this is a demand of the Libyan people who choose who governs the country through direct elections under the supervision of the United Nations and the League of Arab States. Regarding the adoption of a constitution for Libya, Aguila Saleh stressed that a draft constitution has been submitted to the House of Representatives, which has defined a process for a referendum on this matter. “There is a great rejection and disagreement on the draft constitution currently presented in Libya,” he said, adding that the constitution must have a near unanimity since it is not an ordinary text but a fundamental law that deserves more study and greater consensus among Libyans. “We have a constitutional declaration, we can hold elections according to this constitution, and when reconciliation takes place and things calm down, Libyans will have the opportunity to put in place a constitution that satisfies everyone,” he added. For his part, El Malki said that “we have established together strong fraternal relations based on respect, as well as non-interference in Libyan affairs. Our common will is to rebuild the new Libya on the basis of law while respecting the rights of the Libyan people to live in dignity and in peace, security and tranquility”. He noted that “the process of institutional reconstruction was based on a consensus between all parties”, praising in this regard the role played by the Speaker of the Libyan House of Representatives at the beginning and during this process.