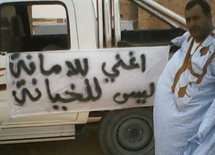 After the harassment, it is simply expulsion to which would be exposed the most popular singer  in Tindouf camps, Naim Allal. Since his last album entitled “the youth of the change”, the Sahrawi singer has not ever since known one day of calmness. Directly targeted by its fierce attacks, the Polisario leaders have decided to act ruthlessly against the singer.
To intimidate Naim Allal, the Polisario leadership has started by dismissing him from his post of responsibility at the Arts department, something which stands for the Polisario Ministry of Culture. The Sahrawi poet finds himself afterwards with his goods confiscated and his Algerian passport taken from him.

A document provided by Algiers to the Polisario leaders going abroad to defend the Western Sahara independence. To understand the fury of the Polisario leadership, you have to listen to the songs of Naim Allal touching the point when it specifically hurts. It starts from the very difficult life conditions in the camps, to Sahrawis’ discontent because of the draconian restrictions on their movings passing by the denial of the right to freedom of expression. Most particularly, the success of the star of Tindouf camps pays tribute to the young Sahrawi people struggling for change. Regrouped at the movement “Sahrawi Revolutionary Youth”, the idle young people in Tindouf camps have violently revolted in March then in April, against the Polisario leadership. They accuse the separatist leaders of bribery, populism and especially blockade every settlement of the Sahara issue, only to serve the Algerian agenda. The young people had also protested against the repression of the Polisario dissident Mustapha Salma, dismissed from Tindouf for having defended publicly the Moroccan autonomy plan for the Sahara. Today, they are afraid that the destiny of Najm Allal won’t be better than that of Mustapha Salma.