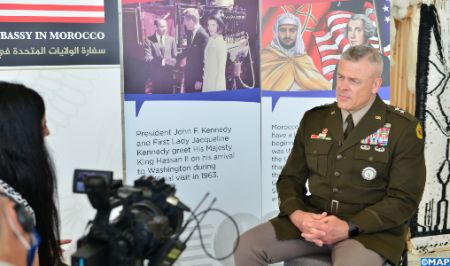 Morocco is a key player for peace and security both in the Maghreb and in Africa, said Wednesday in Rabat, Major General Michael J. Turley of the Utah National Guard. In an exclusive interview with M24, the 24-hour news TV channel of the Moroccan News Agency (MAP), General Turley said that Morocco and its Royal Armed Forces are major actors in peace and security in the Maghreb and throughout the African continent. “I think that Morocco serves the role of a leader both within the Maghreb as well as across the African continent, I see Morocco as an exporter of peace and security not just within the Maghreb not just on the continent of Africa but within the region,” he insisted. General Turley also stressed the exemplary partnership between the Utah National Guard and the Royal Moroccan Armed Forces since 2003, noting that it is certainly an example on the African continent. Certainly it started slowly, but before the Covid pandemic, “we were doing approximately 35 engagements a year”, he noted, assuring in this regard that there is a very strong and active interaction between the two parties in this mutually beneficial partnership. “We learn a great deal from the Moroccans, we hope that we bring a certain amount to the table to help the Moroccan Royal Forces,” he said. He also noted that the African Lion, the largest annual military exercise on the African continent, in which Morocco regularly participates, is of considerable importance to the United States, noting that these large-scale military maneuvers are also of significant importance to the Kingdom because they allow the Moroccans to exercise their leadership in the Maghreb, but also on the entire continent. “This exercise brings other players from across the continent and it allows them to learn from the Moroccans. (…) We see Morocco as an exporter of peace and security across the entire region and so it’s a very beneficial exercise,” he pointed out. In addition, general Turley highlighted the excellent level of the long-standing relationship of friendship and cooperation between Morocco and the United States, noting that this “relationship is strong as it has ever been and we look forward to continuing this relationship into the future, certainly beneficial for both the United States as well as Morocco”.