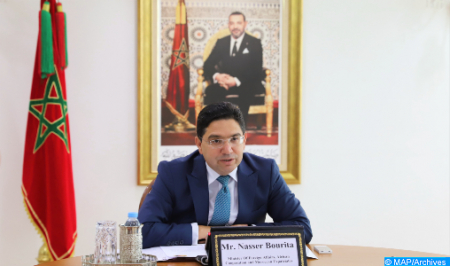 Human Rights Council (HRC) must pay particular attention to the impact of new technologies on human rights, minister of Foreign Affairs, African Cooperation and Moroccans Abroad, Nasser Bourita said Tuesday. Speaking at a high-level side event on “the role of the UNHRC in ensuring a human rights-based approach to new and emerging technologies”, the minister noted that the current pace of digital innovation is outpacing the ability of States to manage their potential societal impacts. “Indeed, there are significant gaps that need to be filled, particularly when it comes to the relationship between new technologies and human rights. In this context, I would like to emphasize four (4) main challenges that, I believe, require a peculiar attention in the context of new and emerging technologies,” he added. The minister explained that new technologies consumption has a non-negligible impact on our environment. In fact, in terms of CO2 emissions, the Internet pollutes 1.5 times more than air transport. Therefore, the Human Rights Council needs to pay a particular attention to the impact of new technologies on the human rights to a safe, clean, healthy and sustainable environment, he said, adding that Morocco would highly encourage the Special Rapporteur on human rights and the environment to dedicate one of his upcoming reports to this issue. Due to the development of new technologies, there are instances where many jobs are lost, particularly in developing countries. Data from the International Labor Organization estimate that by 2030, in about 60% of occupations, at least one-third of constituent activities could be automated and that up to 14% of the global workforce would need to switch occupational categories, he pointed out. Without proper measures, notably in reorienting and training workers to new jobs, entire families might be deeply affected and their rights, including to descent job, denied, he said, adding that other examples relate to the social impacts of misuse of technologies, include sharing of personal data, privacy violations and the spreading of fake news. Terrorism has also been flourishing with new technologies, including through online recruitment by terrorist groups, spreading of hate speech, transfers of money, he added. Regarding the digital divide between the global North and the global South, the minister said that data on Internet penetration rates show that Africa is lagging behind with a rate of 43%, while North America is leading with a rate of 93% and Europe has a rate of 88%. Therefore, it is essential to guarantee a better accessibility to technologies in the global South, including through the transfer of technology, technical assistance, and capacity building, he highlighted, adding that artificial intelligence is by far one of the most powerful technological advances, with incredible positive impact on our livelihoods in a wide area of fields. In this regard, there is an imperative to bringing the IT world and the human rights world together, training engineers on human rights and involving human rights experts in algorithm developments, he said. The Kingdom of Morocco is fully aware of the tremendous positive potential of new technologies in improving its citizens’ lives and advancing human rights, while remaining alert to their challenges, he noted. The visionary approach of His Majesty King Mohammed VI has made new technologies and the digitization of various sectors a major challenge to transform the access and quality of public services, improve economic inclusion, and reduce the digital divide, without ever giving up on the human rights that are at stake, the minister added. Thus, multiple legislative, administrative, and institutional measures have been put in place to boost human rights and respond to the risks arising from new and emerging technologies, such as the establishment, for instance, of the Digital Development Agency and the National Commission for the Control of Personal Data Protection, he recalled. Morocco also attaches great importance to advancing education and gender equality and relies on digital tools to identify and address human rights violations such as discrimination, harassment and increasing women’s access to education through e-learning, he said. The new Development Model that was recently presented to His Majesty the King emphasizes, in turn, that digital technology is a real lever for change and development, he concluded.