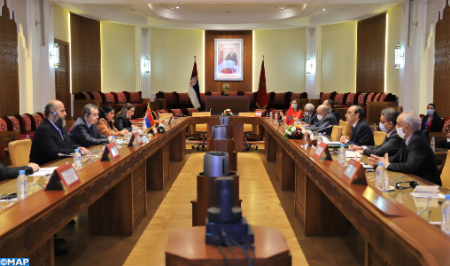 Morocco and Serbia can establish three-dimensional economic partnerships oriented towards the development of the African continent, underlined, Wednesday in Rabat, the speaker of the House of Representatives, Habib El Malki. Thanks to their geostrategic position, Morocco and Serbia can build three-dimensional economic partnerships geared towards the development of the African continent, said El Malki during his meeting with the President of the National Assembly of Serbia, Ivica Dačić, highlighting the importance of diversifying and developing areas of cooperation between the two countries. On this occasion, El Malki indicated that Morocco, under the leadership of HM King Mohammed VI, considers south-south cooperation as a strategic choice, according to a press release from the house. Recalling the cooperation agreement signed in 2018 between the two legislative institutions, he explained that parliamentary diplomacy in the two countries is based on the principles of the United Nations, in particular with regard to “respect for the unity of peoples and unity of states”, noting that Morocco has always been in favor of the territorial integrity of Serbia. He also welcomed the position of Serbia in favor of the territorial integrity of the Kingdom. For his part, the President of the Serbian National Assembly stressed that the parliamentary cooperation between the two institutions is a fundamental pillar for the consolidation of relations between Morocco and Serbia in various fields, lauding the distinguished long-standing friendship uniting the two countries and peoples. He recalled in this regard that Morocco, under the leadership of the late HM King Hassan II, was one of the founders of the Non-Aligned Movement, whose ceremonies will be hosted this year by Serbia to celebrate the 60th anniversary of its creation. “Morocco is an important country which is considered as a pillar of stability and development in the region,” he said. The President of the National Assembly of the Republic of Serbia also reiterated his country’s support for the Moroccan autonomy plan as a solution to the artificial conflict over the Moroccan Sahara, noting that the territorial integrity of the Kingdom is “a crucial question”.  Dačić also praised Morocco for its good management of the Coronavirus pandemic, noting that Serbia has also been able to provide the necessary vaccines to its citizens and succeeded in overcoming the negative repercussions of the pandemic, added the press release. Dačić is on an official visit to the Kingdom along with a large delegation.