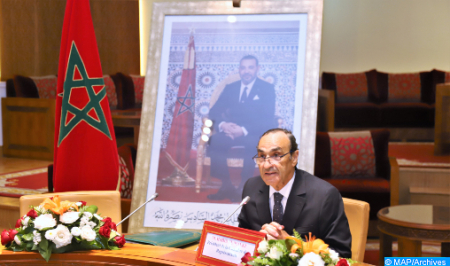 The decision of HM King Mohammed VI to facilitate the return to the country of Moroccans living abroad at reasonable prices is a significant humanitarian gesture, underlined the Speaker of the House of Representatives (lower house), Habib El Malki. Speaking at a meeting held on Monday by the Bureau of the House of Representatives, the House Speaker commended the significant humanitarian decision taken by His Majesty the King to open the borders to the Moroccan community abroad as well as his high instructions to the competent authorities in the sector of transport in order to facilitate the return of this community to the kingdom at reasonable prices, and also to ensure their reception in comfortable conditions. This decision, said El Malki, was received with great consideration and pride by the Moroccan community and their families, said a statement from the House of Representatives issued at the end of this meeting. The Speaker of the House of Representatives, as well as the members of the Bureau, took this opportunity to reiterate their pride in the high patriotic feelings of Moroccans around the world, their patriotism and their attachment to the territorial integrity of the country and to the constants of the Nation. These feelings have been expressed by Moroccans around the world on numerous occasions, through which they have shown their attachment to their homeland and their mobilization for the defense of its legitimate causes. The Bureau of the House of Representatives examined during this meeting some issues relating to parliamentary and legislative control as well as to the work program of the House. Regarding the monitoring action, the Bureau of the House of Representatives set the agenda for the plenary session of oral questions on Monday, June 28, and included social and infrastructure issues, the statement added. Concerning the presentation of the progress report of government action, in accordance with the provisions of Article 101 of the Constitution, the Bureau has decided to hold two plenary sessions on this matter: the first on Tuesday July 6 at 10:00 a.m. during which the Head of Government will present the progress report, while the second is scheduled for Tuesday, July 13, and will be dedicated to general discussion. With regard to legislative action, the Bureau of the House has decided to hold a plenary session on Tuesday, June 22 at 3:30 pm, which will be devoted to the examination and vote of several draft laws.