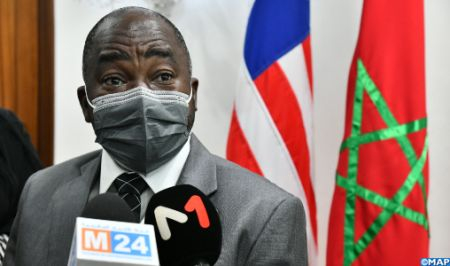 Liberian Minister of Foreign Affairs Dee-Maxwell Saah Kemayah Sr, reaffirmed Thursday, his country’s commitment to continue supporting Morocco’s autonomy proposal in its southern provinces as well as the territorial integrity of the Kingdom. “We reaffirmed our commitment to continue supporting Morocco’s autonomy proposal in its southern provinces as well as the territorial integrity of the kingdom.We will continue to speak in favor of the role played by the United Nations as an exclusive and consensual framework to reach a lasting solution for the regional dispute,” Liberian minister said at a press briefing following talks with minister of Foreign Affairs, African Cooperation and Moroccans Abroad, Nasser Bourita. “We Support the decision 693 adopted by the AU Summit held in Nouakchott in 2018 regarding the Sahara issue,” he added. He hailed the “constructive role” of the kingdom in finding a lasting solution to the current situation in Libya through hosting new rounds of the Libyan dialogue in Bouznika and Tangier. “We support all efforts aimed at creating a peaceful environment in Libya which will enable Libyans to live in the framework of unified institutions,” he said. Regarding relations between Liberia and Morocco, the minister pointed out that “in the last few years, they have been dynamically and constructively evolving, reflecting the special bonds shared by our countries.” “We are interested not only in maintaining this momentum, but in expanding mutually beneficial cooperation in agriculture, mining, energy, tourism, education and vocational training , in a word, in all areas of mutual interest,” he added. Talks focused on the implementation of agreements reached during the second session of the Joint Commission of Cooperation held in 2019, he said, adding that they highlighted the important role of this mechanism, in particular in coordinating and adopting actions to impart new impetus to cooperation between our countries. The relevant departments are working to hold the Commission’s third meeting in the next few months, he added. “We highlighted the need to promote our economic relations and expand our trade. In order to do this, we have agreed to stimulate contacts between economic agencies, and to encourage business communities and investors of both countries to fully explore the possibilities offered by our growing markets”, he explained. “In this context, we consider the opening, in 2020, of Liberia’s Consulate General in Dakhla as a significant step towards the reinforcement of our economic relations with the Kingdom, which will also allow Liberia to capture future opportunities offered by Morocco’s unique position as a regional hub between Africa, Europe and the Middle East,” the official pointed out. He welcomed Morocco’s readiness to support “Liberia Vision 2030”, a plan intended to promote sustained socio-economic development of the people of Liberia. During the talks a considerable attention was given to the Nigeria-Morocco gas pipeline, that will connect Nigerian gas to every coastal country in West Africa, up to the Mediterranean shore, he said. “We reviewed progress on the project and expressed satisfaction at the commencement of the construction activities and we are convinced that this large-scale energy project will immensely boost the region’s economic integration, and benefit all the nations involved by unlocking their industrial potential and curbing their energy deficit,” he highlighted. Naturally, Morocco can count on Liberia’s cooperation and support in achieving the targets and fast tracking the implementation of this transformative initiative, he stressed. “We noted with satisfaction the sustained exchange of bilateral contacts and visits and decided to maintain the strong momentum, he said, reaffirming the mutual intent of the two countries to continue close interaction and coordination of positions at the United Nations, the African Union and other international forums. “We welcome the decision of the Kingdom of Morocco to submit its candidacy as a non-permanent member of the Security Council for the term 2028-2029. We will of course support this candidature,” he concluded.