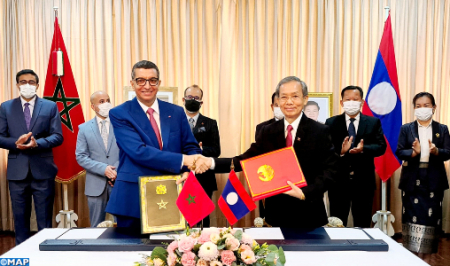 The Kingdom of Morocco and the Laos People’s Democratic Republic signed, Friday in Bangkok, a bilateral agreement on visa exemption for holders of diplomatic, official and service passports, as well as a memorandum of understanding between the Moroccan Academy for Diplomatic Studies and the Diplomatic Institute of Laos. The two documents were signed, respectively on behalf of the Government of the Kingdom of Morocco by the Ambassador of His Majesty the King to Thailand, Laos, Cambodia and Myanmar, Abdelilah El Housni, and on behalf of the Laotian Government by Seng Soukhathivong, Ambassador of Laos in Thailand, says a press release from the Moroccan embassy in Bangkok. This visa exemption agreement for holders of diplomatic, official and service passports is intended to ensure the mutual exemption of visa during the entry, transit and stay in the other country for a period not exceeding thirty days, for the nationals holding these types of passports and whose validity exceeds six months, the embassy points out. With the signing of this agreement, the four accreditation countries covered by the embassy of the Kingdom of Morocco in Bangkok are now bound by Visa exemption agreements for holders of diplomatic, official and service passports (Thailand in 2015, Myanmar and Cambodia in 2017 and Laos in 2021), the source notes. Regarding the Memorandum of Understanding between the Moroccan Academy for Diplomatic Studies and the Institute of Foreign Affairs of Laos, it aims to establish mutually beneficial cooperation between the two institutions in terms of training and research, by offering the appropriate frame of reference for the organization of diplomacy training sessions for the benefit of young diplomats from both countries, as well as the exchange of experiences and publications in several areas, including diplomatic training. This MoU will constitute a cooperation mechanism between the two institutions and will serve as a basis for the consolidation of previous actions, such as the special training session organized in 2015 by the Moroccan Academy for Diplomatic Studies and in coordination with the Moroccan International Cooperation Agency for the benefit of 15 Laotian diplomats. The signing of the two documents constitutes an important step in strengthening the positive dynamic which has marked exchanges between the two countries over the past few years and marks the desire to further enhance bilateral relations as well as the need to enrich and expand cooperation. The signing of these documents is part of the effective implementation of the will of His Majesty King Mohammed VI to move forward in the consolidation of relations between Morocco and Laos at the bilateral and regional level. It also testifies to the determination of the Kingdom to diversify its partnerships with ASEAN countries in general and with Laos in particular through the establishment of legal frameworks with the aim of enhancing bilateral cooperation.