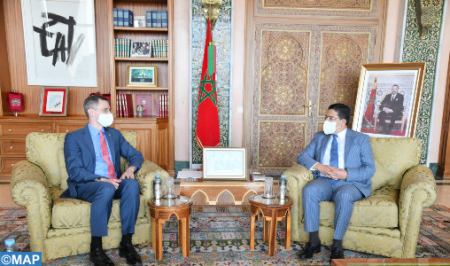 US Acting Assistant Secretary of State for Near Eastern Affairs, Joey Hood, on Wednesday underlined Morocco’s role in fostering security and stability in Africa. “We welcome the continued and valuable support of Morocco in several issues of common interest such as the peace process in the Middle East, stability, security and development in the region” and throughout the African continent, said Hood at a press conference following talks in Rabat with the Moroccan minister of Foreign Affairs, African Cooperation and Moroccans abroad, Nasser Bourita. He stressed, in this regard, that the two countries share the same “perspectives” on issues of “tension” at the regional level, noting, however, that the emphasis must be placed on two priorities: the fight against the novel coronavirus pandemic and economic recovery, hence the need to reduce tension “wherever it exists”. The US diplomat highlighted Morocco’s continued support for the UN efforts on the Libyan issue and the preparation of successful elections in Libya. This is “an essential step towards a stable, unified and democratic Libya,” he pointed out. Hood also welcomed the launch of the first direct commercial flight between Tel Aviv and Marrakech. “The United States welcomes Morocco’s efforts to improve its relations with Israel,” he said, adding that these relations will have “long-term benefits” on the two countries. Regarding Moroccan-American cooperation in Africa, Hood noted that the Free Trade Agreement between the two countries can help to strengthen the dynamics of this cooperation. “We and our companies see Morocco as a gateway to the African continent,” he said.