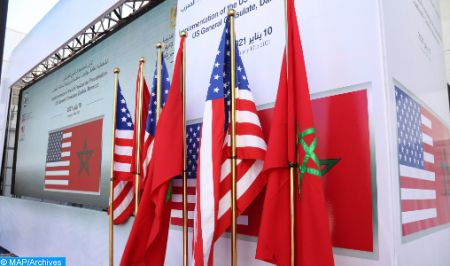 In the field of propaganda, lies and disinformation, the official Algerian news agency, APS, has reached incredible levels. And when it comes to the issue of the Moroccan Sahara, the delirium is always at its height to hide the setbacks and disappointments suffered by Algiers and Lahmada where the American recognition of the Moroccanness of the Sahara dealt the death blow. The notorious news outlet of the distressed Algerian regime has, in fact, delivered another big lie about Washington’s position on the Sahara on the occasion of the visit to Morocco of the US Acting Assistant Secretary of State for Near Eastern Affairs Joey Hood. The senior US diplomat however reiterated, Wednesday in Rabat, loud and clear, the unchanged position of the United States of America recognizing the sovereignty of Morocco over the Sahara. The US official asserted that there is no change in Washington’s policy on the Sahara, compared to the previous administration. Contrary to pernicious rumors, arbitrary generalizations and other tendentious and far-fetched speculations by the APS, the Biden administration has firmly kept the full recognition by the United States of the sovereignty of Morocco over its Sahara.  By sticking to the historic Presidential Proclamation of December 10, 2020, signed by his Republican predecessor, Donald Trump, the Democrat Biden confirmed that this recognition is the doctrine of a state that, beyond alternation which is a normal result of an entrenched democracy, ensures the continuity of its major policies and its higher interests, beyond any party-related consideration or political calculation. This is indeed the firm conviction of a planetary power, a major player in international relations and a permanent member of the Security Council. It is also a reaffirmation of the soundness and legitimacy of Morocco’s cause and a reminder of Washington’s priorities and the depth of historical Moroccan-American relations, now more solid than ever. This recognition of the Moroccan sovereignty goes hand in hand with Washington’s unwavering support for the Moroccan autonomy plan which is the basis of the current political process, carried out under the exclusive auspices of the United Nations, after the failure of all previous plans. In Rabat, the American diplomat, moreover, highlighted the continuous efforts aimed at “helping the United Nations process to get results” concerning the Sahara issue. Hood expressed Washington’s support for a credible political process, led by the United Nations, for regional peace and stability. “This is the objective sought by the United States and Morocco for the entire region,” he said, emphasizing, in this sense, the role of the Kingdom as a “security provider” in the region. Mr. Hood lauded, in this regard, “the continued and valuable support of Morocco in a number of questions of common interest such as the peace process in the Middle East, stability, security and development in the region” and throughout the African continent. Under the leadership of HM King Mohammed VI, Morocco has adopted the diplomacy of clarity, firmness and constancy which has earned it successive diplomatic successes that have turned the ambitions by Algeria and the Polisario into mirages. To break the deadlock over the Sahara issue and revive the UN political process, Algeria which, through its mobilization and its positions, its actions and words, is a real party to the conflict, in its creation and its continuation, must imperatively assume the responsibility of its settlement to the extent of its responsibility in its creation. And it is not the production of deceit by controlled media, nor the escalation and hatred fueled by apparatchiks hated by Algerian youth, which will help move the issue forward.