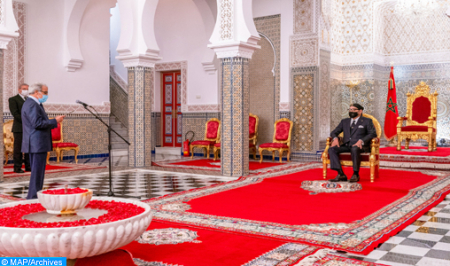 HM King Mohammed VI on Saturday received, at the Royal Palace in Fez, Abdellatif Jouahri, Governor of Bank Al-Maghrib, who presented to the Sovereign the annual report of the Central Bank on the economic, monetary and financial situation for the year 2020. In his address before His Majesty the King, Mr. Jouahri said that the year 2020 was marked by the spread of the Covid-19 pandemic, whose persistence and consequences continue to weigh on Morocco, like all other countries around the world, stressing that, in implementation of His Majesty’s high instructions, all stakeholders have mobilized to face it and mitigate its effects. The Governor indicated that during the year 2020, the domestic economy was also affected by unfavorable weather conditions, which resulted in a 6.3 percent contraction of real GDP and a loss of 432 thousand jobs. Moreover, as a result of the decline in fiscal resources and the sharp increase in Treasury’s investment spending, the budget deficit worsened to 7.6 percent of GDP and the public debt ratio increased to 76.4 percent of GDP. He pointed out that the sharp decline in foreign trade led to a reduction in the current account deficit to 1.5 percent of GDP, while the official reserve assets of Bank Al-Maghrib increased to the equivalent of more than 7 months of imports of goods and services, and inflation was limited to 0.7 percent. As part of the efforts to mitigate the economic impacts of the pandemic, Mr. Jouahri indicated that Bank-Al Maghrib lowered its key rate twice, bringing it to 1.5 percent and released the mandatory reserve account in full. It has also tripled the potential of its refinancing operations for banks, while meeting all their liquidity requests. In addition, the bank introduced new refinancing lines for the benefit of participatory banks and microcredit associations, expanded its small and medium sized enterprises’ program, and temporarily alleviated some prudential rules. He explained that these measures enabled an adequate financing of the economy, as evidenced in particular by the significant decline is interest rates and the steady pace of bank loan growth. The Governor of Bank Al-Maghrib highlighted that, thanks to the wise leadership of His Majesty the King and His close monitoring, Morocco is gradually overcoming this crisis with significant progress in the vaccination campaign and a marked recovery of the economy, despite the concerns surrounding the evolution of the pandemic. In this regard, the Governor indicated that the activation of the Mohammed VI Investment Fund and increased recourse to public-private partnerships, along with the implementation of the 120 billion dirhams stimulus plan, are expected to boost investment and job creation. On the other hand, Mr. Jouahri mentioned that the important projects underway, many of which were launched under the instructions of His Majesty, contribute to this recovery and to speeding the pace of growth on a longer term. He highlighted that the main challenge today is to achieve their implementation in a consistent manner and within the fixed deadlines. Among the most important reforms that must be accelerated, according to the Governor, is the reform of the educational system. While all assessments still confirm its weaknesses, preparing the workforce and elites of tomorrow should be raised to an absolute priority. In turn, the Governor said that the advanced regionalization project has made significant progress. However, its completion remains dependent on the availability of highly qualified human resources. He also pointed out that the reform of the public sector which is making significant progress in some areas, needs an acceleration of the implementation pace of all its components in accordance with the objectives set for it. Moreover, in order to strengthen the national productive fabric, the Governor stressed that efforts should be redoubled to address some practices that negatively affect the competitiveness of the national economy. This is mainly related to unfair competition, tax evasion and unprofitable subsidies. He also emphasized the need for a rigorous implementation of the law relating to the National Authority charged with fighting corruption. The most important project in the post-pandemic era, adds the Governor, is the generalization of social protection announced by His Majesty in His Throne Speech in 2020. Given its expected impacts on the living standards of the population, social cohesion and the integration of informal activities, it is expected to enable Morocco achieve a major breakthrough in terms of human development, as well as in terms of competitiveness and growth. Therefore, the mobilization of everyone is required to ensure its success within the set deadlines. The implementation and completion of this set of important projects, said the Governor, require the mobilization of country’s resources and capacities, and need, in particular, an elite with the necessary leadership qualities. It also call for the effective participation of all stakeholders within the framework of transparent governance that essentially enshrines the principles of meritocracy and expertise. Concluding his speech, the Governor said that by implementing these projects, Morocco would transform the crisis into a real opportunity that will provide new impetus to its economy and put it on a path towards a strong, sustainable and inclusive growth.