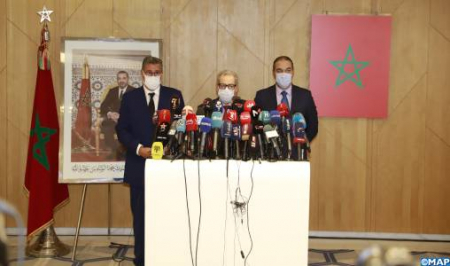 The head of government-designate Aziz Akhannouch, held on Monday talks with the Secretary-General of the Popular Movement party (MP) M’hand Lanser, as part of the consultations to form the next government coalition. This meeting was an opportunity to have a clear view of the modus operandi under which the head of the government-designate intends to form his government, Lanser told the media. “It was also an opportunity for our party to express its point of view on the matter,” he noted, adding that “the consultations will continue with the aim of placing the interest of the nation above all other concerns.” The leader of the Popular Movement party also extended his congratulations to the new head of government for the confidence placed in him by HM King Mohammed VI. The MP came fifth in the September 8 legislative elections, winning 29 seats. The first place went to the National Rally of Independents (RNI-102), followed by the Authenticity and Modernity Party (PAM-86), the Istiqlal Party (PI-81) and the Socialist Union of Popular Forces (USFP-35). The head of government-designate held earlier on Monday consultations with the Secretaries-General of PAM Abdellatif Ouahbi and PI Nizar Baraka, as well as with the first secretary of the Socialist Union of Popular Forces (USFP) Driss Lachguar. HM King Mohammed VI received last Friday at the Royal Palace in Fez, the president of the RNI, Aziz Akhannouch, whom the Sovereign appointed Head of Government and charged him with forming the new executive. “We will engage, from today, consultations with the parties, with which we will agree in the future, for the formation of coherent, homogeneous majority with convergent programs,” said Akhannouch.