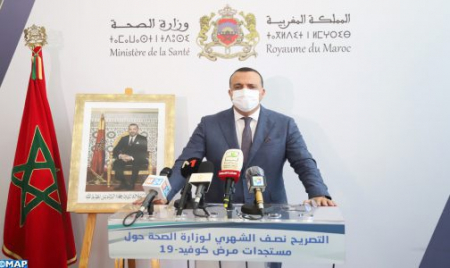 The number of Covid-19 cases has continued to decline for the fifth week in a row, the Ministry of Health announced on Tuesday, while reporting high rates of critical cases and deaths. “The study of indicators relating to the monitoring of the epidemiological situation, from August 31 to September 13, shows that the downward trend has continued for five weeks with regard to Covid-19 cases,” said the head of the department of communicable diseases, Abdelkrim Meziane Bellefquih. “Nevertheless, high numbers and rates of critical cases and deaths continue to be recorded,” he said during the presentation in Rabat of the bimonthly assessment of the epidemiological situation in Morocco, noting that infections fell from 42,424 weekly cases recorded at the end of August to 20,562 cases last week, a decrease of 52%. The reproduction rate of the virus has also dropped during the last two weeks, stabilizing at 0.86 for the fifth consecutive week, he added, noting that the positivity rate has also fallen from 18% to 12. % during the same period. The same downward trend was observed in the number of active cases, which fell from 60,000 to less than 30,000 cases as of Monday. The number of critical cases, for its part, fell by 30%, from 2,537 two weeks ago to 1,764 until Monday. The occupancy rate of beds dedicated to critical cases rose from 50% to 33% during the same period. The number of cases placed under intubation devices in intensive care units has stagnated over the past two weeks, while the death curve has registered a significant drop for the fourth week in a row, dropping from 645 deaths two weeks ago to 473 deaths the past week, a decrease of 25.6%. Regarding the COVID-19 vaccination operation, Mr. Meziane Bellefquih said that Morocco has exceeded 36 million injections, first and second doses combined, calling for the strictest respect for preventive measures and effective participation in the national immunization campaign.