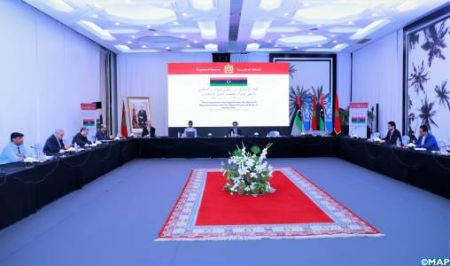 The delegations of the Libyan House of Representatives and the High State Council called, Friday in Rabat, on the international community to support the electoral process to be held on December 24, in accordance with consensual laws and based on the results of inter-Libyan political dialogue. In a joint statement issued at the end of their consultative meeting on the electoral law, the two parties urged the international community to ensure that the results of these elections are respected by sending international observers to confirm that they are properly conducted. The consultative meeting held in Rabat and which aimed to agree on the organization of presidential and parliamentary elections on December 24, 2021, took place in “conditions of friendship and brotherhood and in a climate of consensus and compromise between partners of the same country,” stressed the statement read by the representative of the House of Representatives, Al Hadi Seghir, at a joint press conference with the second vice president of the High State Council, Omar Bouchah. This meeting reflects the importance of the upcoming electoral process and the need “to overcome the current differences” to lead Libya to “a sustainable and stable stage,” but also the belief in the spirit of consensus between the Libyan House of Representatives and the High State Council, enshrined in the political agreement reached in Skhirat on 17 December 2015, according to the same source. In addition, the statement welcomed the support of Morocco to the Libyan people to achieve security and stability in this country, as well as “the warm welcome” of the Kingdom, while thanking the U.S. ambassador to Libya, Richard Norland, for providing support to this meeting.