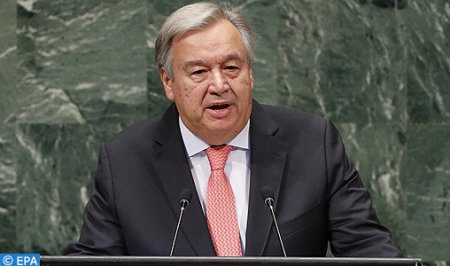 The UN Secretary General, Antonio Guterres, has submitted to the Security Council, the advanced copy of his annual report on the Moroccan Sahara, covering the period from 30 September 2020 to 31 August 2021. This report is submitted in anticipation of the consideration of the issue of the Moroccan Sahara during the current month of October, and the adoption of a resolution extending the mandate of Minurso, for which Guterres has recommended a duration of one year. This report is marked by the highlighting of the diplomatic achievements of the Kingdom in the Moroccan Sahara over the past year. In this context, the UN SG highlighted the historic inaugurations of Consulates General by 16 countries in the cities of Laayoune and Dakhla. Guterres stressed, in this regard, that Bahrain, Burkina Faso, Eswatini, Equatorial Guinea, Guinea Bissau, Haiti, Jordan, Libya, Malawi, Senegal, Sierra Leone, Suriname, the United Arab Emirates and Zambia have announced their intention to inaugurate or have opened Consulates General in the Sahara. These diplomatic representations are added to the 10 consulates of African, Arab, Caribbean and other countries opened in the cities of Laayoune and Dakhla, totalling 26 since December 2019, which illustrates the international and diplomatic recognition of the Moroccanness of the Sahara. The UN Secretary General also mentioned the historic proclamation, on December 10, 2020, by the United States, of the full sovereignty of the Kingdom of Morocco over its Sahara. Guterres said that the United States has recognized Moroccan sovereignty over the entire territory of the Sahara and reaffirmed its support for Morocco’s serious, credible and realistic autonomy proposal as the only basis for a just and lasting solution to this conflict. He also said that on December 29, 2020, the United States inaugurated a virtual consulate in the Sahara. In addition, Guterres emphasized the economic and infrastructural development of the Moroccan Sahara, as well as the continued investment of Morocco in its southern provinces. The UN Secretary General said that on April 30, the Moroccan authorities announced the winning bid for the construction of the Atlantic port of Dakhla and that its construction is underway. This new port, in deep waters, is one of the largest projects ever launched in Morocco with a budget of MAD 12.4 billion. Its construction will boost economic activity in the southern provinces. Guterres noted the continuation of construction work on a highway linking Tiznit to Dakhla. Large-scale projects that several Arab countries were able to see, during their on-site visit last June. Indeed, as evidenced by the Secretary-General in his report, diplomatic delegations from Jordan, Oman, Saudi Arabia and Yemen visited Dakhla and Laayoune on 24 and 26 June 2021 to explore investment opportunities in the Sahara. This is the 4th consecutive year and the 6th time that the UN Secretary General has referred to Moroccan investments in the Sahara. The UN chief had devoted several paragraphs in the reports of 2016, 2018, 2019 and 2020, to the socio-economic development and investment of Morocco in its Sahara and of which the local populations are the main beneficiaries.