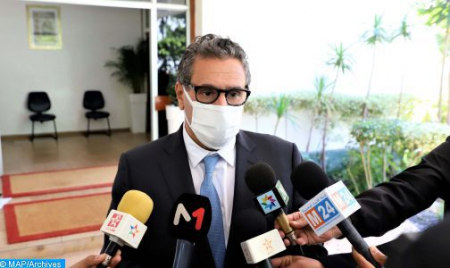 The head of government, Aziz Akhannouch, said Thursday that the new government, whose appointment ceremony was chaired by HM King Mohammed VI at the Royal Palace in Fez, brings together competencies and will seek to meet the aspirations of citizens through the implementation of the Royal project of the new development model. Speaking to reporters, Akhannouch said the new cabinet will, thanks to its new profiles, “be a government of actions and results.” The Government, which is aware of the high expectations of citizens, will work to address the major issues that arise, he said. The formation of the government takes place following elections which gave rise to results having consecrated the democratic process in Morocco with a high voter turnout, thus making this new team “the alternative sought by the citizen”, he added. According to Akhannouch, this government draws its strength from the alliance of three political parties having a strong and comfortable majority, whether at the national level or at the level of provinces and regions. He noted that this homogeneity will allow the optimal and successful implementation of the government program, which is consistent with the high royal guidelines and the new development model. “The new Government is united and combines skills,” he said, noting that all the indicators suggest “positive results for the citizen and the country”.