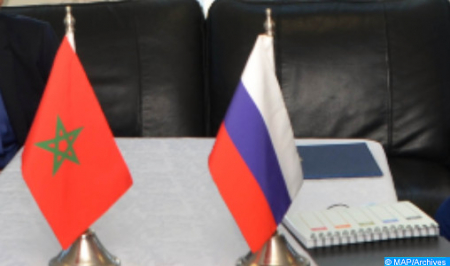 The 8th meeting of the Moroccan-Russian Joint Cooperation Commission for Economic, Scientific and Technical Cooperation as well as other important bilateral events were at the heart of a meeting held on Thursday between the Special Representative of the President of the Russian Federation for the Middle East and Africa and Deputy Foreign Minister Mikhail Bogdanov and the Moroccan ambassador to Moscow Lotfi Bouchaara. According to a statement from the Russian Foreign Ministry, “during this meeting, topical issues related to the development of the traditionally friendly Russian-Moroccan relations were thoroughly examined including the organization, as soon as possible, in  Moscow of the 8th meeting of the Joint Intergovernmental Commission for Economic, Scientific and Technical Cooperation”. The two sides also discussed the preparations of the 6th ministerial session of the Russian-Arab Cooperation Forum in Marrakech, “including the coordination of mutually acceptable dates for its holding by the end of this year, taking into account the constraints related to the Covid-19 pandemic”, the ministry points out. Bogdanov and Bouchaara “expressed their deep astonishment at the unfounded information spread by several media outlets on an alleged cooling of relations between Moscow and Rabat, adding that the multifaceted and mutually beneficial Russian-Moroccan cooperation is developing dynamically, and highlighting the active role played in this joint work by the Russian ambassador to Morocco, Mr. Valerian Shuvaev,” the Russian Foreign ministry underlines in a press release. The two sides exchanged views on the regional agenda and discussed the Sahara issue as well as the situation in the Maghreb region. The Russian side “reaffirmed its unwavering position in favor of a negotiated settlement of crises and conflicts based on respect for fundamental principles and norms of international law, as well as the relevant resolutions of the UN Security Council,” according to the same source.