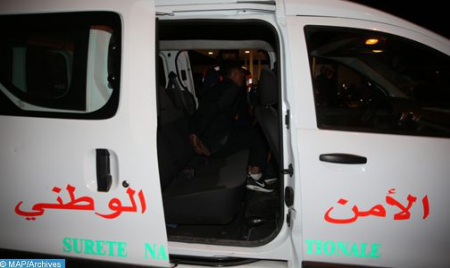 Policemen in Tangier on Friday arrested a French national of Algerian origin over his alleged involvement in international drug trafficking as part of a transnational criminal network, said on Saturday the General Directorate of National Security (DGSN) in a statement. Tangier’s security services had opened a judicial investigation into the suspect’s (47-year-old) access to a private clinic using forged German identity papers, after being seriously injured by a bladed weapon, said the same source, adding that research and investigations undertaken revealed that the suspect is the subject of an arrest warrant at the national and international levels. According to investigations, the suspect was wanted by both the National Judicial Police Brigade and the prefectural service of the judicial police of the city of Tetouan for cases related to international drug trafficking. The suspect is also the subject of an international arrest warrant issued by the French judicial authorities in June 2021 for international drug trafficking, money laundering and serious physical assaults, the statement pointed out. The injured suspect is currently receiving the necessary health care at a hospital, pending the judicial investigation carried out under the supervision of the competent public prosecutor’s office, with a view to shedding light on all of his criminal activities linked to international drug trafficking and money laundering and arresting all those who attacked him, the source added.