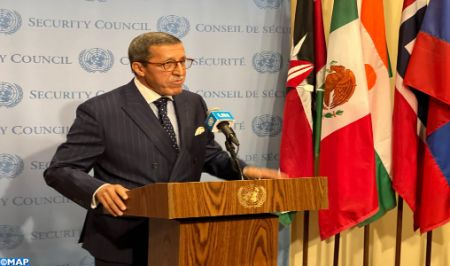 Morocco’s permanent representative to the UN, ambassador Omar Hilale, said Friday in New York that without Algeria, a “stakeholder” in the artificial conflict over the Moroccan Sahara, “there can be no political process”. “For everyone and for the UN Security Council, Algeria plays a role” in this regional dispute. “It is responsible and a stakeholder,” Hilale insisted, stressing that “in the absence of Algeria, there can simply be no political process”. Hilale was responding to a question on the Algerian decision not to take part in the round table meetings and the impact of this boycott on the political process, at a press conference held following the adoption by the UN Security Council of resolution 2602 extending the mandate of MINURSO until 31 October 2022. The Moroccan diplomat also said that Algeria, which took a decision that “no one understands”, “has only to tell” the personal envoy of the UN Secretary General, Staffan de Mistura, as well as the Security Council”, noting in this regard that Algeria “should assume its responsibility before the international community because it will be a violation of Security Council resolutions”. Hilale recalled, in this regard, the “stubborn” facts of history including the letter that the President of the Algerian Republic had sent to the UN Secretary General, urging the resumption of the political process. He made the same request before the African Heads of State. For his part, the Algerian Minister of Foreign Affairs has sent missives to the UN SG on the same subject, while multiplying statements and tweets calling for the resumption of the political process, noted the ambassador, adding that even the Permanent Representative of Algeria to the UN “has continued to make efforts to pressure members of the Security Council and the Secretariat for the appointment of a personal envoy” to enable the resumption of this process. “Algeria has mobilized everyone to demand, and sometimes with very critical terms towards the Secretariat and the UN Secretary General, the resumption of the political process,” said Hilale.