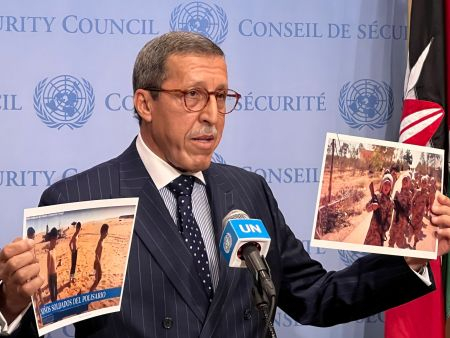 Algeria “must be held accountable for the military recruitment” of children at the hands of the “polisario” in the camps of Tindouf, southwestern Algeria, said Friday in New York, Ambassador Omar Hilale, Permanent Representative of Morocco to the UN. “Algeria will assume its responsibility before history and before the international community. It will have to account for the recruitment of children in the camps of Tindouf,” said Hilale, who was speaking at a press conference following the adoption by the Security Council of resolution 2602 extending the mandate of MINURSO until October 31, 2022. In this regard, Hilale denounced the “exploitation and military training” of children by the polisario on Algerian territory. “What Algeria and the polisario are doing is serious,” he said. The military recruitment of children is a “war crime” which is prohibited by all international conventions and treaties, as well as by the United Nations Charter, the Charter of Human Rights and the covenants of political, economic and social rights, the diplomat said. This practice is also prohibited under the 1989 International Convention on the Rights of the Child, the Vancouver Principles and the Paris Principles, he said, adding that a new Security Council resolution (2601), which addresses children in conflict, condemns the military recruitment of children. Hilale also noted that the same resolution calls on states to take the necessary measures to end this recruitment and protect children to give them the education they need, noting, however, that “instead of giving children pens, brushes and teaching them to sing, the +polisario+ teaches them atrocity, murder” and how to wield a Kalashnikov or machete and “martyrdom” just like Daesh and al-Qaeda. “All this is happening in the territory of a member state that has signed all the treaties, conventions and texts of the United Nations on children,” said the ambassador, noting that Algeria “will be held accountable for the recruitment of children in the camps”.