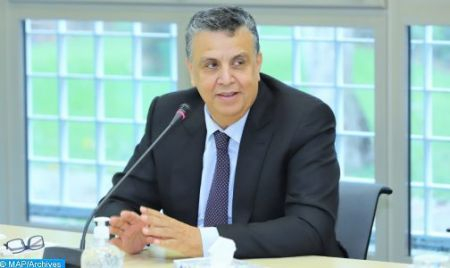 Minister of Justice, Abdellatif Ouahbi said, Tuesday in Rabat, that his department places the development of criminal policy at the heart of its concerns and priorities, adding that it has developed a clear legislative plan related to it with well-defined guidelines, which is reflected through the number of bills presented and the depth of their content. In response to a central question on “the situation of the Kingdom’s courts and the challenges related to the development of criminal policy” during the weekly session of oral questions in the House of Advisors, Ouahbi stressed that the Ministry has taken a battery of legislative and regulatory measures to develop the aspects of the Moroccan criminal policy, bearing in mind the rise in crime, on the one hand, and the harmonization with international charters and conventions inherent to human rights, as provided by the Constitution of 2011, on the other hand. These measures, added the Minister, included fundamental novelties both in terms of incrimination or punishment, as well as in terms of rights and freedoms and strengthening the means of fighting crime, in addition to the modernization of criminal justice mechanisms, indicating, in this regard, the revision of the Penal Code and the Code of Criminal Procedure. Regarding the revision of the Penal Code, Ouahbi explained that the Ministry tends to present an integrated project that affects all the texts contained therein, according to a holistic legislative approach that provides answers to many points raised, including the constitutionalization of a set of repressive, incriminating and protective provisions and the internationalization of criminal rules through the ratification by Morocco of many international charters, both those related to the fight against crime or human rights, emphasizing that a multidisciplinary committee should be established to expedite the development of an integrated project that will achieve the desired objectives. Regarding the revision of the Code of Criminal Procedure, the Minister said that this project is one of the major legislative projects launched by the Ministry, in that it represents the driving force of the criminal justice system, due to its close connection with the field of protection of rights and freedoms, the fight against crime, the realization of the security of individuals and communities, the support of the evolution of penal systems and the rectification of shortcomings emanating from the practice on the ground.