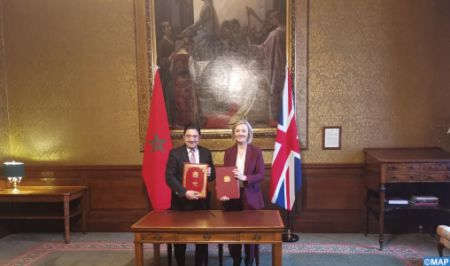 Minister of Foreign Affairs, African Cooperation and Moroccans Abroad, Nasser Bourita and British Minister of Foreign Affairs, Liz Truss, held, Wednesday in London, the 3rd session of the Morocco-GB strategic dialogue. During these talks, the two ministers reaffirmed their common vision for the establishment of a strategic partnership between the two countries, through the strengthening of political dialogue, the deepening of economic relations and security cooperation and the promotion of human and cultural ties. In this sense, the two parties adopted a joint Morocco-UK political Declaration and signed two decisions setting up the main bodies of the new Morocco-UK Association Agreement, concluded between the two countries in 2019, namely the Council and the Association Committee. They also set up a sub-committee in charge of trade, investment, services, agriculture, fisheries, sanitary and phytosanitary aspects (SPS), and customs. The two sides also pledged to continue their coordination in the fight against the Covid-19 pandemic and climate change. Bourita and Truss highlighted on this occasion the history of friendly and mutually beneficial relations between the two kingdoms. They welcomed the celebration this year of the 300th anniversary of the signing of the first trade treaty between Morocco and the United Kingdom, on January 23, 1721 in Fez. Truss took the opportunity to commend, on behalf of the British government, the reforms undertaken by Morocco under the leadership of HM King Mohammed VI for a stronger, more open and dynamic Moroccan society and economy. She also praised the success of the vaccination campaign conducted by the Kingdom in response to the Covid-19 pandemic. Bourita, for his part, expressed, on behalf of the government of Morocco, appreciation for the UK’s support for the launch of the Moroccan vaccine manufacturing initiative, improving the health resilience of Morocco and Africa and generating economic results and highly skilled jobs in the productive sectors. Bourita also had fruitful exchanges with Minister of State for the Middle East and North Africa at at the Foreign, Commonwealth & Development Office of the United Kingdom, James Cleverly. Morocco and the UK also held the first session of their Association Council, which will serve as a platform to deepen the Morocco-GB economic partnership.