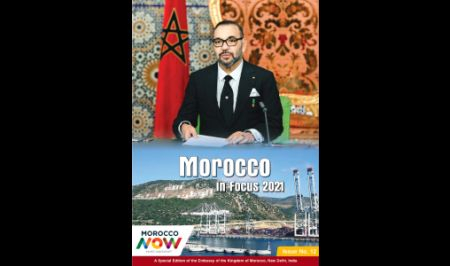 A new issue of the magazine “Morocco in Focus 2021” of the Moroccan Embassy in India has been published offering readers a broad overview of the various achievements of the Kingdom during the year 2021. This issue also focuses on the events that have marked Moroccan-Indian relations over the past year. Thus, the 12th issue of the magazine sheds lights on the launch by HM King Mohammed VI of the vaccination campaign against Covid-19 in Morocco in January 2021. On this occasion, recalls the magazine, the Sovereign had received the first dose of vaccine, thus kicking off the vaccination campaign for all citizens, the objective being to immunize all components of the Moroccan people, reduce and eliminate cases of contamination and death due to the epidemic, and contain the spread of the virus, with a view to a gradual return to a normal life. The 104-page publication also refers to HM the King’s presidency, last July at the Royal Palace of Fez, of the ceremony to launch and sign agreements related to the project of manufacturing in Morocco the anti-Covid19 vaccine and other vaccines. This project aims to produce in Morocco the anti-Covid vaccine, as well as other key vaccines, in order to promote the Kingdom’s self-sufficiency and make Morocco a leading biotechnology platform on the African continent and the world in the field of the “fill & finish” industry. The magazine also discusses the diplomatic action at all levels under the leadership of HM the King for the preservation of the territorial integrity of the Kingdom. In this regard, it highlights the relevance of the Moroccan Autonomy Plan, and the virtuous dynamic of reforms that the Moroccan Sahara region is experiencing, recalling the opening by many countries of consulates in the cities of Laayoune and Dakhla. In addition, the publication tackles several topics including Morocco’s efforts in the fight against terrorism, climate change and renewable energy megaprojects launched in recent years that have placed Morocco among the leading countries in terms of competitiveness of kilowatt hours.