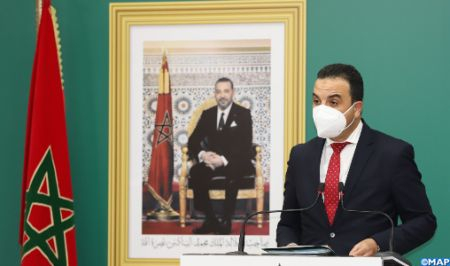 The Government Council, convened via videoconference Thursday in Rabat under the chairmanship of the Head of Government, Aziz Akhannouch, adopted the draft decree 2.22.27 amending and supplementing Decree 2.21.484 (August 3, 2021) on the composition of the national commission in charge of the implementation of sanctions taken by the Security Council in relation to terrorism and the proliferation of weapons, their financing and modes of exploitation. Presented by Minister of Justice, Abdellatif Ouahbi, this text aims to add two vital sectors to the composition of the commission, namely the Directorate General of Studies and Documentation and the National Agency for Land Registry Conservation and Cartography, in view of the active and strategic role of these two institutions in the exercise of powers conferred on the commission, said Minister Delegate for Relations with Parliament, Government Spokesman, Mustapha Baitas, at a press briefing after the Council. The addition of the two institutions also takes into account the added value that will confer their representativeness to the work of the commission in the implementation of sanctions contained in the resolutions of the UN Security Council in connection with terrorism and the proliferation of weapons, their financing and their modes of operation. The creation of the commission was decided within the framework of the action and efforts of Morocco to bring the national system of fight against money laundering and terrorist financing in line with the 40 recommendations of the Financial Action Task Force on Money Laundering (FATF) and the 11 immediate results, through the law 12.18 amending and supplementing the Penal Code and the law 43.05 relating to the fight against money laundering which illustrate the commitment of the Kingdom to enforce the international standards in this area.