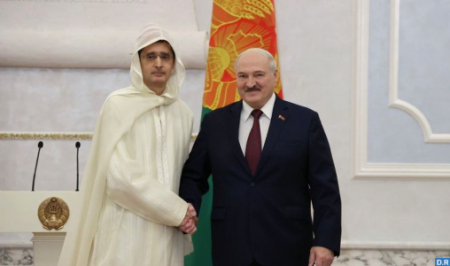 The ambassador of His Majesty the King in Moscow, also accredited to the Republic of Belarus, Lotfi Bouchaara handed over, Wednesday in Minsk, his credentials to president Alexander Lukashenko. During this audience, the president of the Republic of Belarus stressed that Morocco is “an important trading partner of Belarus in North Africa,” said a statement by the Belarusian Presidency. “We have a great potential for the development of trade,” the statement said, adding that great prospects are opening up especially in the areas of agriculture and industry. In this regard, the Belarusian head of State “drew attention to the potential for development of economic cooperation with African countries,” the statement added. Earlier, Bouchaara held talks with Mikalai Barysevich, deputy minister of Foreign Affairs and Vladimir Ulakhovich, president of the Belarusian International Chamber of Commerce. During these talks, the two parties explored the various actions that can be taken to strengthen relations between the two countries, especially at the commercial level, through the upcoming signing of various cooperation agreements. The Kingdom of Morocco and the Republic of Belarus have maintained diplomatic relations since 1992.