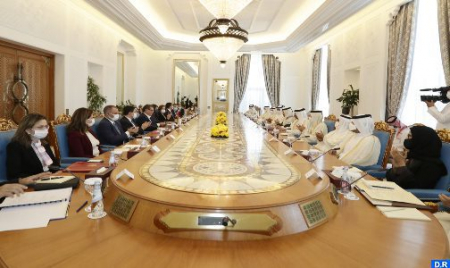 Qatar welcomed the pioneering role played by His Majesty King Mohammed VI in consolidating the foundations of sustainable development in Africa and supporting the foundations of peace, security and stability in the continent, so as to meet its peoples’ aspirations to progress and prosperity. The report of the 8th session of the Moroccan-Qatari High Joint Committee, held on Monday and chaired by Qatari Prime Minister and Minister of Interior Sheikh Khalid Bin Khalifa Al Thani, and Morocco’s Head of Government Aziz Akhannouch, stressed that the two parties also reiterated their commitment to joint Arab action, as a suitable framework to consolidate the foundations of stability and permanent development in the Arab region. This also concerns developing modes and mechanisms for Arab action in accordance with international economic developments and on the basis of solidarity and tangible cooperation to promote successful experiences and build together the future of Arab countries. The elaboration of this joint action should be carried out in respect of the national sovereignty of States and their territorial integrity, said the same source, emphasizing the importance of dialogue as a means to resolve Arab conflicts. During this meeting, the Moroccan side welcomed the organization for the first time in Qatar of the elections of the members of the Shura Council, considering that this important step is in line with the constitutional choices of the State of Qatar, paving the way for a new era in the development process led by Emir Sheikh Tamim bin Hamad Al Thani. Furthermore, the Commission praised the significant progress made in the strategic partnership between the Kingdom of Morocco and the Cooperation Council for the Arab States of the Gulf, calling for accelerating the development of its institutional framework and mechanisms. The Moroccan delegation, which took part in this meeting, includes the Minister of Foreign Affairs, African Cooperation and Moroccans Abroad, Nasser Bourita, the Minister of Tourism, Handicrafts and Social Economy, Fatima Zahra Ammor, the Minister of Youth, Culture and Communication, Mohamed Mehdi Bensaïd, the Minister of Economy and Finance, Nadia Fettah Alaoui, the Minister of Industry and Trade, Ryad Mezzour, the Minister of Energy Transition and Sustainable Development, Leila Benali, as well as the Ambassador of the Kingdom in Doha, Mohamed Setri.